This recording, taken from two specially-lengthened broadcasts on 6th and 13th December, 1947, is widely regarded as perhaps the greatest ever made of Verdi's masterpiece, Otello. As NBC announcer Ben Grauer notes in his introduction to the first broadcast, it has a special link to Toscanini, who as a young cellist had played in the world première of the piece, under Verdi's baton, in La Scala, Milan on 5th February, 1887, some 60 years earlier.

Verdi is regarded by many as especially important to Toscanini, and this is among his greatest recordings - Mortimer Frank writes: "Of all the composers in Toscanini's repertory, Verdi was probably closest to him... what NBC preserved... if not necessarily representative of his staged performances or of his best work, is often compelling. Given limitations such as occasionally weak casting, they are uneven. Bet when everything more or less fell into place, as in the complete Otello, a performance of towering merit resulted."

Meanwhile we see in the notes on this work at Wikipedia: "most music-guide reviewers contend that a recording made of a 1947 radio broadcast of the opera, conducted with thrilling verve and precision by Arturo Toscanini and featuring such solid singers as Herva Nelli, Ramón Vinay and Giuseppe Valdengo, is musically (if not in terms of sound quality) the best of these versions".

For the restoration and remastering engineer tackling this recording today it is the phrase in paratheses above which is in sore need of justified removal. One discography of Toscanini lists sux separate releases of this recording, and I'm reasonably confident that there are actually more than this. Yet when I visited ardent Toscanini fan and collector Christophe Pizzutti earlier this year to take temporary charge of a large number of rare recordings for transfer and restoration, it was this recording he repeatedly pressed me to work upon, convinced that my XR remastering technique could finally reveal the full sonic magnificence of this immortal performance.

And so, with sources provided both by Christophe and by other collectors, I've endeavoured to assemble the very best quality material from which to assemble what I hope can be seen as a definitive recording of the two broadcasts (note that some recordings switch between live and rehearsal material, others include sections of severly reduced fidelity, none has had the benefit of XR re-equalisation and the latest remastering techniques associated with it).

The recording was made in the very end of the pre-tape era, and would have been preserved over a number of acetate discs. Fortunately these have been remarkably well-preserved in various incarnations, and the results of careful selections of the best possible sources and the magic of both XR remastering and Ambient Stereo processing (direct mono is of course also available) makes a huge impact on the final overall sound quality of the recording. This is one of Toscanini's greatest masterpieces, and it's never sounded better. 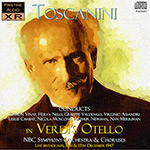 This was one - or, more accurately, two - of the all-time classic nights in American opera. Toscanini famously played the cello in the La Scala orchestra at the world premiere of Otello and his authority in this work has to be acknowledged, even by those who might not prefer his style. The merits of this performance hardly need rehearsing: it has been reviewed many times before on this site. Suffice it to say that Vinay’s Otello remains one of the great interpretations of the role, heroic yet vulnerable, while Nelli’s Desdemona manages to combine beauty, strength and vulnerability in miraculous fashion. I’ve never been as convinced by Valdengo’s Iago, not least for his mistimed entries in Acts 1 and 2 - can you imagine what Toscanini must have said to him at the end - but he certainly has character to spare.

The real interest here is in the remastering. Pristine Audio has been doing fantastic work recently breathing new life into agèd recordings that are well loved. Their website is well worth a look and they also offer downloads of fabulous quality. Andrew Rose has managed to achieve astonishing clarity with this issue. Yes, there are still occasional hisses and crackles, but how could there not be in a recording of this age? He has managed to, as it were, strip away the varnish that has accumulated in other issues and there are plenty of things that are freshly audible here which may well have passed the listener by before, such as the clarity of the big tuttis in the storm scene, or the bubbling woodwinds at the third verse of Iago’s drinking song. Nelli’s top notes are captured without a hint of strain or interference, yet the passage at the beginning of Act 4 flows with openness and not a hint of congestion. Rose has used “a number of sources from various avid Toscanini collectors” - how mysterious! His aim was to find the best recording of each section of the opera and then edit them together to produce the finest possible version of the performance. Without doubt he has succeeded mightily. To my ears at any rate it was impossible to hear the joins and the whole performance flowed beautifully from one moment to the next. He finished his note by saying “I am convinced that this release has succeeded in making great sonic advances over all previous issues, both on LP and CD.” I certainly haven’t heard any other version to make me disagree. As a fun little extra we’re also given the original radio commentary and audience applause.

This is a performance which every lover of the opera has to have. Love him or hate him, Toscanini has an unending ability to surprise: listen to the way he broadens out the tempo for the climax of the storm yet speeds up for the conclusion of the love duet, and the way he plays around with the textures of the Willow Song is quite remarkable. Extraordinary, maybe: perverse, arguably: but effective? Certainly. This, to my mind, is the clearest version of this performance that you’re likely to find, so if you’re choosing between versions then you can pick this one with confidence.