Toscanini's final opera performance took place over two concerts at Carnegie Hall, both broadcast live on radio in specially-extended programmes. The original cast included the tenor Jussi Björling, replaced at short notice by Jan Peerce. This performance uses the 'censored text' version of the opera (see below), which moves the setting from Sweden to Massachusetts.

The source discs for this transfer were six LP sides issued as promotional gifts by "the makers of Mobilgas and Mobiloil", who had sponsored the broadcasts. Packaged in an album reminiscent more of typical US 78rpm sets than their LP equivalents, the set includes sleevenotes by NBC announcer Ben Grauer and a montage of press cuttings (see below) reviewing the concerts.

Each of the disc labels includes the words "Air Check" on it, which does raise the outside possibility that the discs do not include retakes Toscanini recorded in June 1954 at his final recording sessions, also in Carnegie Hall, and which are present in RCA's commercial issue. However, this seems unlikely - there is no radio announcer or applause on the recording, and clearly some efforts would have been made to produce the finest quality discs. Without catalogue numbers or further details it is difficult to know exactly when these discs were pressed and to whom they were sent, or indeed how many sets were ever made.

The sides themselves proved to be in excellent condition with the exception of the fifth, which was slightly scratched during the final four minutes or so, some remnants of which may still be apparent. Sound quality is excellent throughout - the close-up microphone technique, whilst holding back much of the ambience of Carnegie Hall, does allow for excellent clarity in both voices and orchestra.

Furthermore, this new transfer has benefitted enormously from XR remastering, bringing fabulous new depth and clarity to the sound and opening it out tremendously, something further enhanced when listening to the Ambient Stereo version, which helps create the sense of space lacking in the original by drawing out ambience from the recording and spreading it subtly across the soundstage. 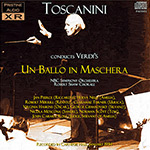 It is a never-ending source of wonder to find modern audio technology giving new life to recordings originally made many decades ago. The best technicians – usually those with a strong musical background - can remove not only clicks, crackles and pops but, indeed, the whole opaque fuzziness that we had always assumed to be inherent in “primitive” recording processes. And now, thanks to the application of even more advanced technologies, we can hear sounds that, while certainly captured at the time of the original recording, have never since – thanks to relatively poor playback mechanisms – been suspected to have been there at all.

Thus, last year Music & Arts’s re-release of the best known of Furtwängler’s Bruckner recordings, “digitally remastered ... by Aaron Z. Schnyder, using the revolutionary new harmonic balancing technique”, offered striking new clarity to those classic accounts. And now I have in front of me Pristine Audio’s reissue of Toscanini’s incandescent account of Ballo, originally recorded over two sessions in January 1954 and newly remastered in the “XR” process.

Most technological developments these days are beyond my limited understanding, but there is a lucid and very helpful – as well as thought-provoking – explanation of XR on Pristine Audio’s website. And I can certainly confirm that, on the basis of this release, the results of applying XR technology can be very striking.

Un Ballo in Maschera is my personal favourite of Verdi’s operas and Toscanini’s account has always been my first choice of recordings. Of all the 71 volumes in RCA’s collected Arturo Toscanini Collection, it – volume 59 in case you are wondering – is probably the one I take most frequently from my shelves. The star of the whole show is Toscanini himself displaying unrivalled passion, drive and fervour. “This”, the conductor observed after making the recording, “was my last opera performance. I began by hearing a performance of Un Ballo in Maschera at the age of four (his memory was playing him false: he had actually been just three years old!) up in the gallery, and I’ve finished by conducting it at 87”.

The sheer urgency with which Toscanini drives the NBC Symphony Orchestra is tremendous – and must have been tremendously challenging – but the players respond as if their lives depended on it - their careers quite possibly did. Thanks to the survival of a great deal of filmed material, notably the famous pioneering “TV concerts” of the late 1940s, we are quite familiar with the conductor’s baton technique and, as one listens to these discs, it is quite easy in the mind’s eye to see him slashing away with a degree of energy more appropriate to a man half his age. XR technology successfully and strikingly uncovers a great deal of orchestral detail – notably among some especially plangent woodwinds – that has hitherto remained largely hidden.

It has sometimes been suggested that Toscanini preferred working with less than top rank singers as they were more likely to be amenable to his strict disciplinary style and less likely to have minds of their own. There is some evidence to contradict that idea – notably the fact that, for this very recording, the stellar Jussi Björling had actually been scheduled to sing Riccardo (yes, we are in Boston, not Stockholm) and was only prevented from doing so by last minute indisposition. Nevertheless, the way in which Toscanini exercised psychological domination over many singers can easily be seen in the 1949 televised concert performance of Aida where soprano Herva Nelli resembles at times nothing so much as a terrified rabbit caught in the headlights of an approaching sports car - the maestro eventually made amends to some extent by leaving her his baton in his will.

Here the conductor has assembled a strong and dependable vocal team, many of whom – Nelli, Peerce, Moscona, Scott – he worked with repeatedly in this final stage of his career. It is, if you like, a sort of “in-house” company and, as such, the various voices here are well known, though, with XR’s apparent ability to draw the ear to sounds that can, no matter how familiar you are with previous incarnations of this recording, come as something of a surprise, Nelli’s voice emerges here as notably stronger in its lower registers. As her noble paramour, Jan Peerce, never the most subtle of singers, delivers a forthright account fully in accordance with Toscanini’s high voltage approach: the Act 2 love duet between Riccardo and Amelia, Teco io sto, is a real show-stopper and an undoubted highlight of the whole performance.

The late Verdi from Toscanini that is most often singled out for special praise – and rightly so – is his unrivalled Falstaff but this new remastering of Ballo - marred only by disappointingly dreary artwork, inadequate packaging and the fact that full notes can only be accessed online – may well help it achieve the equal recognition it deserves as a definitive account of a wonderful score.