From early on, however, the original plans began to unravel. Reiner feuded with Kanin over some of the latter’s staging ideas, such as having the conductor face the audience during the overture, and having the chorus lying supine during the “Duidu” portion toward the end of the second act where they would be out of the conductor’s sightline. More significantly, and unbeknownst to the Met management, Reiner had recently switched allegiance from Columbia to its rival RCA Victor, which was planning its own Fledermaus highlights album using Met stars under contract to them, to be conducted by Reiner (available from Pristine Audio).

After learning of this, Bing maneuvered to replace Reiner with Eugene Ormandy, the Philadelphia Orchestra music director who was a Columbia artist, but who had had limited experience as an opera conductor. (His continuing symphonic commitments would cause one Saturday afternoon Fledermaus broadcast to be completed by another conductor, as Ormandy had to leave early in order to lead a concert that evening in Philadelphia!) Reiner, furious when he heard he had been replaced, happened upon Ormandy in the office of the Met’s musical administrator, and said with his typical dryness, “I hear that you are going to conduct Fledermaus. Do you know the piece?”

Meanwhile, the rest of the cast took shape. Ljuba Welistch, the “Bulgarian bombshell” who had made such a striking impression as Salome under Reiner during the Met’s previous season, would sing Rosalinda. Wagnerian tenor Set Svanholm was an unexpected choice as her husband, Eisenstein. Although Pons had learned the role of Adele, she would sing it only on the Columbia recording. Patrice Munsel was the Adele for the première, and would go on to record the role for RCA, as would the Orlofsky, Rïse Stevens. John Brownlee, famed for his Mozart interpretations at Glyndebourne in the 1930s, would sing Falke; and the increasingly busy Met “house tenor,” Richard Tucker, would display a hitherto unknown gift for comedy as Alfred. The production opened on December 20, 1950, and the recording was begun four days later.

For his part, Dietz intended his new lyrics not to be a mere translation of the original version. In addition to the slangy Americanisms he added (“If you wangle/Every angle/You can get yourself a spangle,” sings Adele in her opening aria), he used the music as a springboard for sentiments that were sometimes quite different from the original intentions of Haffner and Genée. In the opening of the second act, the chorus addresses would-be librettists in the audience, advising them not to write a ball scene into their plays; and later on, “Herr Chevalier” becomes a drunken speculation on the afterlife (“When we are gone, where do we go? … Below, below, below.”)

The common criticism of this recording has been that it was not echt Wienerisch enough. (As Alan Blyth wrote in Opera on Record, “the cast, Welitsch apart, are oceans away from the idiom of the piece.”) But that rather misses the point. It was never intended to be simply a production of Strauss’ beloved operetta in translation, but rather an opportunity to hear some wonderful singers having a great time. And through this recording, which has not been available since the LP era, we can share it with them. 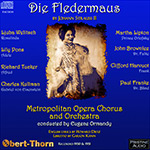