THE WORK AND ITS COMPOSER.

R. Constant Lambert, a son of Mr. G. W. Lambert, A.R.A., the painter, and brother of Maurice Lambert, sculptor, was born in London in 1905. He was trained at the Royal College of Music, under Vaughan Williams and R. O. Morris. He was the first English and, incidentally, the youngest composer to be commissioned to write a ballet for the late Serge Diaghileff. This ballet, " Romeo and Juliet," was produced at Monte Carlo in 1926. Another ballet by Lambert was produced by Nijinska in Buenos Ayres in 1927.

The composer himself admits that his recent works have been strongly influenced by modern dance music, and " Rio Grande," which has created what is perhaps the musical sensation of the season, is the best and most typical example of this influence.

" Rio Grande " had its first London concert performance in the Hallé Orchestra concert at the Queen's Hall on December 13th, 1929, and met with such success that it was repeated at the subsequent Hallé Concert the following month.
The work was inspired by the poem of the same name by Sacheverell Sitwell. Without being too exact as to locality, the music and poetry endeavour, and with very great success, to paint a " tone-picture " of any gay cosmopolitan riverside town in North or South America, particularly where negro dances and gaiety mingle with other musical influences. The instrumentation of the work has been most carefully planned, its various groupings being played off against each other or combined with dazzling effect. It roughly divides itself into three sections :—a small choir, with an occasional solo for the alto ; an orchestra of strings and eight brass instruments, with a percussion department containing no less than 15 varieties of instruments, with five players to handle them ; and a solo piano. With these groups the composer has very happily conveyed his picture, with constantly developing changes and exciting rhythms. The piano, too, is also utilised in the same way, both as a means of adding to the orchestral tone colour scheme and in some exceedingly beautiful solo parts.

The work is one of real sentiment, and if the poem be read to enable the listener to appreciate the atmosphere, the sincerity of the composer in his expression will be quickly apparent. The music is gay and joyous, with quieter moods as the picture changes, and the composer succeeds in carrying the hearer with him an interest that is sustained by the picturesqueness of the music itself and its animation.

Its freshness is an additional charm, and the entire work is one that will yield complete enjoyment at a first hearing. 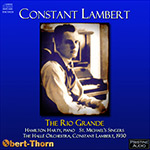 Part I—Plucked chords on the strings and a crescendo in which the percussion department is strongly in evidence, lead to an incisive figure for the piano and the announcement on the violins of a fragment of strongly syncopated rhythm. Close on the heels of this, the choir enters, its lively syncopated phrases making it clear that stately sarabandes and madrigals have no place in the dances of the Rio Grande of to-day. After an immense climax and a short but lovely solo by the alto, the piano enters with a light syncopated figure that continues while the chorus sing " but they dance in the city." This dance rhythm is hushed fora moment by " the bell's huge tolling," but dominates the work until brushed aside by a vigorous march that announces the Comendador and Alguacil "blowing orders on their trumpets . . . tireless while all others tire." The return of some of the previously heard thematic fragments in a whirl of sound ends this part.

Part 2.—A brilliant cadenza (based on tunes heard W the first part) for solo piano, accompanied only by four drum-players, leads to a most poetic slow passage for piano alone, on a new rhythm that betrays its " tango " parentage. Presently the choir re-enters softly to the words " The noisy streets are empty "—a most beautiful piece of writing—and the mood thus engendered continues to the end of this side, particularly notable being some of the striking chordal writing for the lower registers of the brass at the very end.

Part 3—Still based on music previously heard—the thematic economy is very striking — there is a gradual return to the former animation, followed by a furious climax on the words " as the Rio Grande rolls down to the sea," with the upper notes of the piano and trumpets stridently piercing through the orchestral and choral hurly-burly. Suddenly there is a moment's complete silence, and a new rhythmic figure on the piano and castanets is introduced, followed by the choir enunciating a theme based on the melody that announced the Comendador and Alguacil in Part 1, to the words "Loud is the marimba's note," and ending in another great fortissimo of almost hectic energy.

Part 4—The quiet mood of the ending of the poem is mirrored in the music, for, following a candenza-like flourish on the piano, and a momentary return to its previous tango-like rhythm, the alto soloist sings of the enchantment wrought by the soft southern hinds on the brazen music heard faintly on the ships lying anchored in the bay. The chorus softly interjects short phrases mingled with some brief roulades by the pianist, and the music concludes with the softest of chords by the strings and piano. After all the clash and brilliance that have gone before, this effective sentimental close is most poetic and makes a fitting conclusion to a masterly and dazzling study.

(NB. The Parts referred to here indicate the disc sides)