As given by by Elisabeth Schumann

These lectures offer a fascinating insight into the life and music of the much-loved soprano, Elisabeth Schumann, speaking at the end of her life (she died in 1952). Amongst the musical suggestions and illustrations she sprinkles anecdotal gems, such as can be heard in our sample here, where Brahms berates the orchestra of Arthur Nikisch and demands that they play more "blue".

She leads us through a musical journey of lied singing, and with expert accompaniment from pianist Ernest Lush, offers seven full songs, plus numerous short examples from both these and other works. Despite the simplicity of the 1950's BBC presentational style, the programmes move along at a good pace, neither overly technical nor glib - two delightful and rare offerings from one of the world's great singers.

Notes on the restoration:This recording came to us via a "private issue" 33rpm LP, which had clearly been mastered from older, probably acetate 78spm, records. Both lectures were originally rather murky and scratchy, with varying amounts of noise and hiss throughout. I've used a series of techniques modified from our usual XR restoration methods to improve the tonal quality of both speech and singing here, and carried out a huge amount of declicking and decrackling, as well as a considerable amount of noise reduction. Some remnants of the original poor quality sound does, inevitably, remain - largely in the background - and should not be a distraction from the fascinating musical and speech contain to be found herein. 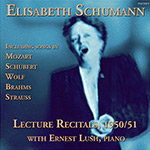 "This is so much more than a record of a singer performing songs; it is a window to another era, the era of Slezak and Gadski, Gerhardt and Paul Reimers, singers for whom expression was as important as musicality. Needless to say, Pristine Classical enhances the sound quality of the original disc, although a small amount of the original surface swish remains. Indispensable for fans of the soprano as well as for vocal students wanting to learn more about the interpretation of Lied."