The recording presented here is of great interest, as it was one of Decca's final large-scale mono recordings before the switch in the mid-1950's to recording in stereo, even before it was possible to produce stereo LPs.

As such what you hear in this recording is mature technique, thoroughly tried, tested and understood. The difficulties which had plagued many early vinyl releases were behind them, and Decca were well into their stride; the company's full frequency range recording technology was almost a decade old, and recording tape technology had been in use for six years.

As with the final direct-to-disc shellac recordings of 1947/8, everything was pretty well optimised for excellent results, and for the restoration engineer, working from near-mint copies, this was a dream to remaster. I hope you will enjoy it as much as I have! 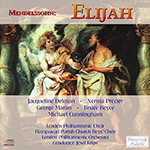