MONTEVERDI  Madrigals and other works

"One of the purest treasures the gramophone has given us"
- The Record Guide, 1952

This collection of various madrigals and other works by Claudio Monteverdi (1567-1643) has often been regarded as one of the most important recordings of the twentieth century. Made in 1937 under the direction of Nadia Boulanger (who accompanies some of the pieces at the piano), it re-introduced to the world a composer who had been virtually forgotten for centuries; yet he was the musical genius who had practically invented opera with Orfeo in 1607, and whose marrying of musical techniques old and new set the stage for the entire Baroque movement.

Yet there is more to this recording than simply the merit of discovering lost musicians. In these ten 78rpm sides Boulanger conjured up musical perfection such that it has rarely been unavailable since, on a variety of transfers, good, bad and indifferent.

I am grateful to a long-time customer of Pristine Audio for suggesting this set. I had not listened to a note by Monteverdi since my school O-level music examinations in 1985, when I decided that his Beatus Vir would be the one work I had no intention of learning about, such was my lack of engagement with it at the time. (In the light of this recording perhaps I've achieved the maturity lacking all those years ago for that piece!) 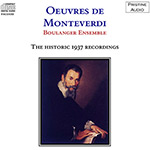 Writing in Fanfare magazine in 2003, Raymond Tuttle states: "While it is not difficult to find versions that surpass these on technical grounds—I mean both the production of notes and the electronic reproduction of sound—I can’t think of any that are more sincere, more heartfelt. Boulanger guides these works with the bittersweet tenderness of a mother guiding her infant child in his first steps."

He goes on: "Boulanger’s small, handpicked ensemble of singers was a diverse group. There were émigrés from Eastern Europe, a countess, and a tenor who was equally at home in French art song and the music hall. For the most part, these were not “great” singers, but they were dedicated to Boulanger and to the composers that she in turn served. Hearing these musicians, one senses that they were a family united by music.

The age of these recordings probably works in their favor, giving them a magical patina impossible in the clinical digital age. The feeling of exploration, of Sleeping Beauties awakened with a kiss, is moving. Call me a sentimentalist, but there it is."