When Bill Rosen's Bach LPs arrived it was with some trepidation that I began the restoration. Bill had generously offered to start a sponsorship scheme with a recording which is perhaps the most dear to him. I took the first LP out of its polythene sleeve, carefully cleaned it and placed it on the turntable, apprehensive of the six sides I had promised to work on.

The stylus lowers gently onto the treasured vinyl and the opening Kyrie eleison begins. I am horrified. The sound is dreadful - as if the master tape had been thoroughly mangled, chewed and spat out by a particularly unruly tape machine (which I suspect it had). The prospect of two hours of this is terrifying.

And then, after about 36 seconds, a silence - a pause - and the orchestra comes in perfectly, and I breathe a sigh of relief. Although the condition is to be revisited more mildly for a couple of seconds later in the same side, there is otherwise no repeat of it.

It took me five days of work, on and off, to correct those opening few bars to the degree you can now hear. Had the entire recording been in a similar condition I'd either be working on it still, or more likely locked up!

I decided therefore to make the full 15'50" of this opening available as our sample movement - I hope you'll enjoy it as much as both Bill and now I do. 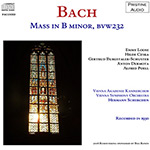 None, for me, has ever touched the infinite the way his does

My grandmother gave me $15 in 1951 for my 19th birthday. She told me to spend it on some good music. I was in college at the time and I rather brashly asked the choir director, "What is the greatest piece of music ever written?" With not much hesitation, he answered, "The Bach B Minor Mass". At the time, I was very much into classical music, but I was quite unfamiliar with Bach or Handel or the Baroque style. Nonetheless, I went to the largest record dealer in Los Angeles and bought the Westminster recording of Hermann Scherchen's performance of the B Minor Mass.

When I played it, I was horribly disappointed. I couldn't make head or tails out of it. I thought the music was harsh, unmelodic, weird. I was tempted to return it. I particurly hated the long, opening Kyrie. The orchestration with the harsh trumpets I thought primitive and brutal. I made several more attempts, but finally put the album away in a drawer.

About six months later, our college (UCLA) chorus began to rehearse the Mozart Requiem. I was utterly taken with the great fugue (Kyrie Eleison) and its repetition at the end of the work. I was so entranced with the music that I couldn't get it out of my mind. I decided to take the Bach B Minor out and give it another listen and suddenly I understood it and felt it. I played it over and over and I could hear nothing else for a while (although we kept rehearsing the Mozart). Since then (I was 20), the Bach B Minor Mass and especially the opening Kyrie has always appeared to me as the acme of musical spirituality. The first voice of the opening fugue has always seemed not music, but a pulse of the universe.

In the ensuing 53 years I have collected many B Minor Masses, many much more finely recorded than the Scherchen. But none, for me, has ever touched the infinite the way his does.