Die Schöne Müllerin (The Fair Maid Of The Mill) was written in 1823, predating Schubert's Winterreise by some four years. As with the later work it uses the words of the poet Müller, telling through a series of twenty songs the story of a young apprentice miller who falls in love with his master's daughter.

As usually happens in these stories, all does not go smoothly - his initial belief that his love is returned sours as he loses her to a forest hunter, until finally in despair he throws himself into the brook to which he confided his earliest hopes.

Unlike the tragic Winterreise however, Schubert sets this verse to romantic and sentimental music, the verses unlocking his feelings for nature and the joys of youth - the composer was still only 26 at the time, though he had just five more years to live.

If this wonderful premiere recording has but one fault, it would be the downwards transposition from the original youthful tenor to a slightly more mature baritone pitch. That minor niggle aside, it is a superb compliment to the Winterreise recorded by Hüsch and Müller the year before (and offered here as PACO005), with a recording quality that even manages to surpass that amazing recording. Once again Hüsch is crisp and clear, his rich baritone perfectly balanced to Müller's sympathetic accompaniment.

Between 1925 and 1945 Gerhard Hüsch was a regular star of the operatic stage, making his debut Liberau in Lortzing’s Der Waffenschmied in Osnabrück. He was also one of the most admired singers of Lieder of the 1930's - as this recording demonstrates, this admiration was wholly justified. After his retirement, Hüsch made a second outstanding career as a master teacher of vocal interpretations, latterly also in London. 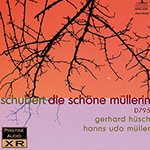 My problem with Die Schöne Müllerin has always been that it is about a very simple-minded young teenager who roves alone, falls in love, is jilted, and commits suicide. While there are wonderful teenage pianists and violinists, there are no teenage lieder singers. Just as one does not want matronly sopranos to portray dewy teenage Tatyanas in Tchaikovsky's Eugene Onegin, one is uncomfortable with dry-voiced 50-year-olds expressing the agonies of unrequited young love.

No one sounds like a teenager, but Gerhardt Hüsch comes very close. He is so simple and joyous in proclaiming his lust for roaming in the first song. In the sixth song, where he is in love with the miller's daughter and begins to think she reciprocates, he asks the miller's stream if she loves him and Hüsch is so yearning here. In the next song, the youth and Hüsch allow themselves some virile impatience. She does say yes and there is such joy announced in the song of triumph "Mine!" Alas, a competitor comes ("Hunter") and Hüsch shows us the teenager's anger and despair.

Hüsch deepens his interpretation and uses the fires of unrequited love to make a real human being out of that shallow teenager, but consumes him in the process and the boy drowns himself in the miller's stream. The final song, The Stream's Lullaby, is sung by Hüsch and played by Miller with a tenderness and empathy which no teenager could provide.

The sound is entirely beautiful and apt.