Before we consider any musical aspects of this recording we ought to consider its ground-breaking technological achievement. We've taken the advice of the British National Sound Archive in dating this recording to 1927, probably early spring. The first commercial recordings made with microphones ('electric' recordings) were released in 1925.

This recording was made entirely on location at the Scala Theatre, London, with full cast, chorus and orchestra, and released across 24 sides of 10" 78rpm discs - the first electric opera recording in history in the English language. This is the first time this recording has been restored and reissued.

You might therefore expect it to be a bit sonically challenged. What surprised us is just how good it does sound, and how relatively straightforward the restoration turned out to be compared to similar recordings of this era. It's a cracking performance that whisks you straight into Leoncavallo's masterpiece!

Of the cast members it is perhaps Heddle Nash whose name is still well known, with many reissues of his recordings available on CD. The soprano Miriam Licette made her stage debut in Rome in 1911 in Madame Butterfly and went on to become a mainstay of the London opera companies of the era, both with the BNO and Covent Garden. Frank Mullings was later to become Professor of Singing at the Royal Manchester College of Music. Australian Harold Williams made a number of recordings for Columbia, including the title role in a 1930 recording of Mendelssohn's Elijah that we've restored for CD release on Divine Art Historic Sound in March 2005. Dennis Noble's 1923 opera debut was in the Silvio character he plays here - he also went on to make many fine and renowned recordings. 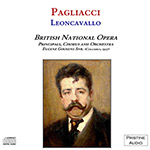 Does it get better than this?

Leoncavallo had one great success at 35, but kept on trying for another 24 years. He had a near success in "La Boheme", but was unlucky to collide with Puccini's great masterpiece. Another bit of bad luck is to be always paired with Mascagni's "Cavalleria Rusticana", which is the greater and fresher work. Still, so splendid are the performance and remastering provided for review that one has no doubt of "I Pagliacci"s" lasting place in the operatic repertoire.

Was there even an English National Opera in 1927? To hear opera in English is such joy. No libretto, no subtitles. The clarity of pronunciation is fabulous. Canio, Tonio and Silvo are full and rich; where is that pinched, white tone we have come to expect? Nedda is even greater; what happened to Miriam Licette? The ensemble is superb. The orchestra is spot on! So superior to many Italian orchestras of later years. I didn't know Eugene Goosens was so fine an opera conductor; the pacing doesn't allow for any dull spots. The prologue, Nedda's bird aria and the finale where Canio stabs Nedda are so passionate. This is one of the great performances of "I Pagliacci".

I've run out of superlatives to describe the remastering. I don't know what the source was. In any case, I detected no surface noise and no joins. It sounded like a good early 1950's mono to me. Does it get better than this?

N.B. Bill asks about the source material for this transfer. This recording was restored entirely from the original UK Columbia 10" 78rpm shellac discs, made in the late 1920's.