Although Adolf Busch was too young to know Johannes Brahms personally, he interacted with many people from the composer’s circle of friends. His violin teachers at the Cologne Conservatory, Willy Hess and Bram Eldering, had known Brahms: Hess had been among Joseph Joachim’s favourite pupils and Eldering, though a pupil of Jenő Hubay, had also come under Joachim’s sway. He turned the pages when the composer and Joachim gave a performance of the D minor Violin Sonata, Op. 108; he played all three Violin Sonatas in private with the composer; and as violist of the Hubay Quartet he took part in concerts with Brahms at the piano. He also heard Joachim play much of the repertoire. Small wonder that Busch’s interpretation of the G major Violin Sonata has such a feeling of authenticity, and we are fortunate to have this live performance from his prime, played by heart by both him and Rudolf Serkin.

In 1906 the 14-year-old Busch heard the dedicatee of the Clarinet Quintet, Richard Mühlfeld, perform it with the Gürzenich Quartet led by Eldering; and in approaching this work he could also draw on Eldering’s experience of touring with Mühlfeld. The British critic David Cairns considers the Busch Quartet’s 1937 recording with Reginald Kell to be the best recording of anything ever made, but the performance here comes from a decade later, when Busch was helping Kell to establish himself in America. Two aspects may be noted: Brahms sanctioned Mühlfeld’s treatment of the opening bars as a slow introduction, only gradually coming up to tempo; and Kell’s use of vibrato is thoroughly authentic, as Mühlfeld employed a great deal of vibrato.

It was in 1910 that Busch first played the Horn Trio, with brother Fritz at the piano and Fritz Michael on horn. He had been alerted to the work’s beauties by Brahms’s friend Dr Gustav Ophüls and had borrowed the parts from him. Although he gave only a handful of performances during his long career, they were always with fine hornists such as Karl Stiegler in Vienna. When HMV proposed a recording for Brahms’s centenary in 1933, he and Serkin were willing, but dubious about Aubrey Brain until reassured by Fred Gaisberg. When they met Brain in May, they quickly realised what a superb player and musician he was, but to save his precious lips, they made only a single take of some sides. As luck would have it, one of those unique takes was damaged at the factory, so the centenary was missed and they met again in November for a ‘make-up’ session. However, Serkin was now playing Steinways rather than Bechsteins, for political reasons, and Brain had run over his horn in his car, so they did a complete remake which has consistently been hailed as the greatest performance on record.

Looking through a large box of test pressings in the basement of Busch’s widow’s house in Basel, this writer found all the surviving takes from May 1933. We can thus hear Brain playing his own instrument, a Labbaye hand-horn from the same year as the Trio, 1865, but fitted with English valves (for the November remake he used a Raoux – fortunately the Labbaye proved repairable). As Side 5 has had to be taken from the November remake, sharp-eared listeners can compare the different horns and pianos.

The C minor Quartet needs no comment except to point out that the German Radio tape captures Herman Busch’s cello particularly well.

The four recordings here offer a very varied sonic experience from four very different source recordings. All have benefited to differing degrees from XR Ambient Stereo remastering, and with each I have aimed for maximum clarity and fullness of sound. The Horn Trio, despite some residual hiss, sounds remarkably good for its age – it’s the oldest recording here – whilst the most recent, the String Quartet, has all the brightness and clarity of the modern era of sound recordings. The Violin Sonata proved the most troublesome: captured on fragile acetate discs, which were later rescued from a waste skip, we are lucky indeed to be able to hear this fabulous performance, even if the sound is less than optimal. Finally the Clarinet Quintet had a harshness to the sound that I’ve aimed to suppress without losing any of the immediacy and vitality of the playing.

XR Remastered by Andrew Rose
Cover artwork based on a photograph of Adolf Busch
Special thanks to: Tully Potter, Dr. Jürgen Schaarwächter
Produced in co-operation with the Max-Reger-Institut/BuschBrothersArchive, Karlsruhe, Germany 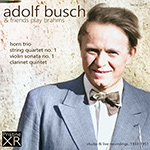