Violinist Adolf Busch has 70 opus-numbered compositions to his credit, plus a host of works without opus-number. Although he always concentrated much more on performing in concert and had the feeling having to "steal the time for composing" from his practising time, his ambitions as a composer were not in the least negligible. His œuvre includes several symphonies, a Violin Concerto, a Piano Concerto and other orchestral works, organ and piano music as well as songs, several choral works (including his demanding setting of Psalm 6 for chorus and orchestra, Op. 70, which he completed but a few days before his death), but above all chamber music in a variety of instrumentations. Although he valued his compositions, he rarely performed them in concert himself. The occasion to hear compositions of Adolf Busch in concert eventually arose at the Marlboro Music School and Festival, where they have been performed regularly since the 1950s; some concerts have been recorded, and some have even been included in a series of records released by the Marlboro Recording Society.

The Five Preludes and Fugues for String Quartet and the Divertimento for Thirteen Instruments were both composed in the 1920s, and both works have been frequently performed at Marlboro. The Divertimento received its first performance by members of the Dresden State Opera Orchestra conducted by Fritz Busch, Adolf’s brother. It is one of Busch's compositions which is somewhat less demanding for the listener, but requires interpretative precision and sprightly inspiration. The Preludes and Fugues for string quartet (which were performed at Marlboro six times from 1958 through 2001) relate to the influence of both J. S. Bach and Max Reger, whom Busch had first met in 1909 and with whom he gave concerts regularly from 1910 until Reger's death in 1916.

The hitherto only performance of Busch’s Clarinet Sonata at Marlboro took place in 1969. The work, written in the first half of 1939 (and refined until 1941) and inspired by Reginald Kell, with whom he had recorded Brahms’s Clarinet Quintet in London in October 1937, may in part have been conceived alongside Reger’s F# minor Sonata for violin and piano, Op. 84, a work that Busch had frequently performed with the composer and later with Serkin, two substantial movements flanking a witty and yet complex scherzo. The appealing Variations for piano duet, a Christmas present for his wife Frieda in 1944, were first performed at Marlboro in 1953, Peter Serkin partnering his father in two performances in 1961 and 1980.

It is fascinating here to delve into Busch's compositions - which have attracted steadily increasing interest over the past few decades.

XR Remastered by  Andrew Rose
Cover artwork based on a photograph of Adolf Busch
Special thanks to Dr. Jürgen Schaarwächter and the Busch and Serkin families.
Produced by kind permission of Marlboro Music and in co-operation with the Max-Reger-Institut/BuschBrothersArchive, Karlsruhe. 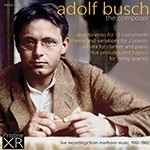