Reger and Serkin never met in person, but a strong Reger performing tradition had been handed down to him, which has been noticeable well into the performing of Rudolf’s son Peter. Though frequently uncredited, one influence on the young Reger performer Serkin must have been the Berlin-based pianist Frieda Kwast-Hodapp, whom Serkin possibly had met for the first time by 1920, the same year he became regular piano partner of violinist Adolf Busch. Like Busch, she belonged to the circle of performers held in high esteem by composer Max Reger. Kwast-Hodapp’s second husband, industrialist Otto Krebs, was Busch’s and Serkin’s landlord when the extended family (also including Busch’s wife Frieda and daughter Irene, who was to marry Serkin by 1935) moved to Darmstadt in 1922, and it was at Krebs’s country estate Holzdorf, near Weimar, that the Busch Quartet plus Serkin spent long summer spells for relaxation and music-making; Kwast-Hodapp’s Holzdorf music room has remained a legend in local music history.

Kwast-Hodapp had become a favourite performer of Reger’s piano music by 1910, and it was she who premiered his Piano Concerto in F minor, Op. 114, as well as the Telemann Variations, Op. 134, of 1914-5. Teenaged Adolf Busch had played to Reger the latter’s Violin Concerto in January 1909, accompanied on the piano by his brother Fritz, and been highly applauded by the composer who soon afterwards furthered Busch’s career by engaging him as a soloist in public performances of the Concerto as well as in numerous chamber music concerts, the last of which took place on 14 March 1916, a bare two months before Reger’s death at age 43.

Reger had recorded for the firm of M. Welte & Söhne, one of the German companies producing automatic pianos, ten piano pieces of his on the hole-punching system of Welte Mignon on 8 December 1905, and he had intended to make some additional recordings, half of them to be devoted to preludes and fugues from Bach’s Wohltemperiertes Klavier, for the Frankfurt-based firm of J. D. Philipps & Söhne, in May 1914, but this had to be postponed, eventually indefinitely. For Welte, Serkin was one of those to record music by Bach, and by the end of making hole-punching system recordings, in c1928, he recorded the Goldberg Variations (meanwhile the Buschs and Serkin had moved from Darmstadt to Basle in April 1927). Due to limitations of the length of hole-punching paper rolls, the work had to be divided into several sections, the maximum limit per roll being c12 minutes. That some variations (variations 6 to 8) were omitted from the recording was not so unusual, as such adjustments were likewise to be found regularly in concert and on record. The advantage of the Welte and similar systems is that, unlike 78s which stores the sound analogously, the recording can be reproduced ‘live’ on a concert grand piano, “like being performed by the performer risen from the grave”. The current performance was only once available on CD previously, with very limited circulation.

Together with Adolf Busch, Serkin was instrumental in founding the Marlboro Music Summer Courses, the concerts of which were frequently recorded and sometimes even committed to disc. David Singer participated in several Marlboro concerts from 1971 to 2001, and he performed here together with Serkin only once a work by Reger – the Bb major Clarinet Sonata, Op. 107, on 10 July 1977 – the work’s sole performance there to date. Singer’s career as one of the most highly respected clarinettists in the United States has been established through performances and recordings as principal clarinettist of the Orpheus Chamber Orchestra, frequent guest appearances with the Lincoln Center Chamber Music Society, two separate performances at the White House for Presidents Carter and Clinton and participation at the Marlboro, Spoleto and Edinburgh Music Festivals. He has performed and/or recorded, amongst others, with Yo Yo Ma, Yehudi Menuhin, Rudolf Serkin, Pinchas Zukerman and members of the Guarneri, Emerson, Orion, and Shanghai String Quartets. The reissue of this performance from Marlboro is a worthwhile addition to the discographies of both Singer and Serkin, whose life-long advocacy of the music of Reger (including his membership in the board of trustees of the Elsa-Reger-Stiftung) is still inadequately represented discographically.

XR Remastered by  Andrew Rose
Cover artwork based on a photograph of Rudolf Serkin taken in 1977
Special thanks for their invaluable assistance to the Serkin family and Dr. Jürgen Schaarwächter
Produced in co-operation with the Max-Reger-Institut/Elsa-Reger-Stiftung, Karlsruhe, Germany 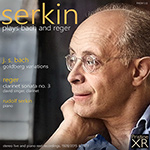