The Léner Quartet were among several groups to arise from the Budapest Opera Orchestra after the Great War. All born in 1894-95, the four players had a particularly uniform style: three were pupils of Jenő Hubay and the cellist was a Carl Popper disciple. Leader Jenő Léner, the prodigy of Hubay’s class, had played in the first violins of the Budapest Philharmonic at 11 (one of two Hungarian quartet players with the same name, he used the Magyar version while Eugen Lehner, violist of the Kolisch Quartet, opted for the German). Second fiddle Josef Smilovits had won the Reményi Prize. Violist Sándor Róth had appeared as a soloist and had already begun to teach at the Academy; he was one of the best quartet violists of his time, with a tone fuller and stronger than that of his Budapest Quartet counterpart. Cellist Imre Hartman, who had won the Popper Prize, anchored the group with firm rhythm and a tone of depth and penetration. Their ensemble was the first success of Leó Weiner as a chamber music coach. In their heyday, their wide vibrato and lavish portamenti did not raise eyebrows; and at a time when the Busch Quartet had not emerged from Germany, their Beethoven, played with immense flair, was greatly admired: they were the first to record the complete cycle.

The revolution of 1918 was their cue to leave the orchestra and retire to the country with a trunkful of scores, to work on repertoire. In 1919 they made their Budapest début and in 1920 gave a Vienna recital attended by prominent musicians including Ravel. He coached them and urged them to play in Paris, which they did the following autumn, causing a sensation. In 1922 they toured Italy and played six times at Wigmore Hall, London. Their pianist was Florence-based Olga Loeser-Lebert, a pupil of Max Pauer, grand-daughter of composer and teacher Sigmund Lebert and widow of art critic Charles Loeser. She hosted their rehearsal stints at her lavish villa.

London became a home from home for the Léners: they were quickly snapped up by the Columbia Graphophone Company Limited, who had developed a new shellac compound, marketing their products as ‘Columbia New Process Records – the ONLY Records without Scratch’. From 13 November 1922 they were fixtures in the Columbia studios, although some early electrics were made at Wigmore Hall. The electric Beethoven series was begun in September 1926 and by March 1927 five sets were ready for release, although the artists later rejected some sides, new takes gradually being introduced. Op. 18/1 was totally redone in 1928 and this is the version presented here. The ensemble’s records did so well that in 1935 they were presented with a Gold Disc.

Forays to North America in 1929-31 were successful artistically but not financially, so the Léners consolidated their European career. They especially liked to present series of recitals illustrating the development of the string quartet. The outbreak of war in 1939 found them touring South America and in 1941 three of them decided to settle in Mexico City. Jenő Léner, however, was set on continuing and, to his comrades’ dismay, abandoned them. By 1942 he was in New York with new colleagues, but this ensemble was plagued by personnel changes. After the war he returned to Europe, insisting on hiring Weiner pupils to keep the style consistent. In 1948 the group visited South America for three months, giving Beethoven cycles in Buenos Aires, Rio de Janeiro and São Paolo. However, Léner’s death from cancer in New York on 4 November brought an end to an illustrious ensemble. 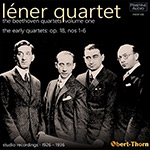