"This latest Kreutzer Sonata is by far the best we have"
- The Gramophone, 1931

Bronislaw Huberman’s recording career can be divided into three periods.  After setting down four sides for Berliner in 1899, he made a series of acoustic recordings for Brunswick in America (1921 – 1925), followed by electrical discs for Columbia in Berlin and London (1929 – 1935).  Some of the Columbia discs were issued concurrently on Odeon, Parlophon and American Decca with different matrix numbers.  The present collection completes the reissue of Huberman’s electrical recordings on Pristine, following prior releases devoted to the Beethoven Concerto (PASC 421), Bach and Mozart Concertos (PASC 397) and the Tchaikovsky Concerto, along with Lalo’s Symphonie espagnole and several encores (PASC 439).

The major work here is Huberman’s classic account of the Beethoven “Kreutzer” Sonata with Ignaz Friedman.  The violinist had recorded it earlier for Brunswick with his regular accompanist, Siegfried Schultze; but the six sides allotted for it then necessitated the omission of repeats in the last two movements.  Here, it is presented complete, and with a partner as accomplished as the violinist himself.  Like Huberman, Friedman was born in Poland in 1882; and as an interpreter, he shared a similar craggy, individualistic approach.  This “Kreutzer” is truly a meeting of two like minds, as unforgettable a performance as the later one by two Hungarians, Szigeti and Bartók (PACM 084).

The unaccompanied Bach excerpts were recorded at the tail end of his 1934 sessions in Vienna, and were issued as odd-side fillers to the Beethoven and Bach E major concertos.  The intensity and individuality on display makes one wish that Columbia had seen fit to record him in the complete Bach Sonatas and Partitas, as HMV was concurrently doing with Menuhin.  The remaining piano-accompanied solo sides spotlight Huberman in a variety of different short works, mainly transcriptions.  His Bruch “Kol Nidrei” was originally coupled with the Schubert “Ave Maria” in a subtle plea for peaceful coexistence that fell on increasingly deaf ears in the years following its release.  In his penultimate session, he repeated two works he had originally recorded for Berliner 36 years earlier, the Schubert Moment Musicale and the Chopin Nocturne.  Although he would continue to concertize almost up to his death twelve years later, he would make no more commercial recordings after 1935.

The transfers on the present release came from a number of sources with varying amounts of surface noise.  The “Kreutzer” was taken from a relatively quiet mid-1930s American Columbia set.  The two unaccompanied Bach works could only be found on rather noisy post-EMI merger English Columbia pressings, while the remaining piano-accompanied sides came from American, English and Australian Columbias as well as German Odeons. 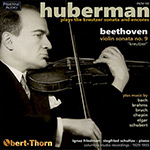 There are occasions when a work which has been recorded over and over again can by a new interpretation fill one with that first-time careless rapture. Such an experience was mine the other day with the new Kreutzer Sonata played by Huberman and Friedman on four light-blue Columbia discs. When I heard the Stokowski Unfinished Symphony I thought that it was a very good performance, but I did not feel tempted to dig out all my other Unfinished Symphonies and play them over to establish a comparison. When I heard this new Kreutzer Sonata I took out every Kreutzer Sonata I had and played them all through twice over, reaching at the end a definite conclusion that this latest Kreutzer Sonata is by far the best we have, and incidentally that the second best is the performance of Cortot and Thibaud in an H.M.V. album of red discs. Yet, suave and delightful as the Cortot and Thibaud version is, it is not what Beethoven meant. “This is the Jew that Shakespeare drew,” Pope is credited with having said of Macklin’s Shylock, when for the first time Shylock was not played as a low-comedy part. The Kreutzer Sonata has come perilously near to declining into a drawing-room piece, and it is a relief to find a couple of artists like Huberman and Friedman who are not afraid to let themselves go. At the same time, there is never a moment when we suspect that either of them is trying to make us think how difficult it all is. Their fire and their fervour convey a sense of ease, and I for one do not mind in the least when some of Huberman’s top notes scrape. I feel that he had been sufficiently carried away by what he is playing to sacrifice his tone for a moment, and it is difficult to persuade a great violinist to sacrifice his tone. I should not be surprised to he told that Friedman had played one or two wrong notes, and I should not feel greatly shocked if he had.

Belongs in the collection of everybody who can even identify the picture of a violin. It’s one of the great recordings of all time.

Isaac Stern once identified Bronisław Huberman as one of the 10 greatest violinists of all time; for those unfamiliar with this titanic violinistic presence, who stopped making commercial recordings in 1935, performances like those that Pristine has released in the last few years (the Beethoven concerto, Tchaikovsky concerto, Bach concertos, Mozart concertos, and Lalo’s Symphonie espagnole) should cement his place among younger listeners. And, as Mark Obert-Thorn’s brief note points out, Huberman found a well-matched partner in pianist Ignaz Friedman for his second recording of Beethoven’s “Kreutzer” Sonata from September 11 and 12, 1930. From the very first measure of the violin’s introductory solo, three things should be clear: first, that Huberman’s reading will incorporate portamentos that nobody would attempt today; second, that he won’t produce a polished sound with a silken bow stroke and a perfectly calibrated vibrato; and third, that with these notes, he’s embarking on a stormy journey that will keep his listeners enthralled from departure to arrival. All that’s clear at once, but the details along the way still produce a great deal of pleasure: the Janissary-like closing theme of the first movement’s thematic section, the percolating triplets in the second movement’s first variation, the white-hot passagework in the second, and the demonic transition back into the main theme of the rondo finale. And, in the midst of all this, it turns out that those portamentos, just a few of the regular devices in his now antiquated expressive armamentarium, begin to disappear into the message’s background, so powerfully does Huberman project his musical ideas. But in this case, he also enjoys as a foil a musician of his own stature, who helps to propel the lift further into the stratosphere. A few recordings changed my life when I first heard them: Fritz Kreisler’s of Grieg’s Third Violin Sonata, Jascha Heifetz’s of Saint-Saëns’s Introduction and Rondo capriccioso, Nathan Milstein’s of Goldmark’s Violin Concerto, Joseph Szigeti’s of Ravel’s Violin Sonata, and Michael Rabin’s of Wieniawski’s First Violin Concerto—and this one by Huberman. It’s a great satisfaction to have it available in a remastering by Pristine—in particular, by Mark Obert-Thorn.

The rest of the program consists of short pieces. The strong accents in the Andante from Bach’s Solo Violin Sonata No. 2, recorded, like the other unaccompanied pieces by Bach in this program, on June 26, 1934, may sound less than subtle, as may also the rather heavy-handed approach the Sarabande and Double from the Solo Violin Partita No. 1; but, although Obert-Thorn’s lament that Columbia didn’t bring out a complete set of the sonatas and partitas may seem routinely rhetorical, every measure of these movements communicates something of interest. The rest of the program comes from sessions in London from 1929 to 1935, with Siegfried Schultze serving as pianist. Bach’s chorale prelude Nun komm der Heiden Heiland, arranged by Huberman, and the Air from the composer’s Third Orchestral Suite, in the popular arrangement for the G-string by August Wilhelmj, appear in much cleaner recorded sound and make a more vibrant tonal impression (with chorale prelude the clearer of the two, although both raise goose bumps—compare the relatively pedestrian recording by Mischa Elman). Huberman doesn’t sound at first so far to the fore in Schubert’s Ave Maria; but he gives easily as moving an account of it as did Jascha Heifetz did in either of his two recordings, the first of which I listened to obsessively from babyhood (actually, not almost) on my father’s 78-rpm recording. The sound improves once again in Schubert’s Moment Musical No. 3, transcribed by Leopold Auer, and Huberman sounds razor-sharp. Huberman’s own transcriptions of Chopin’s waltzes in C♯ Minor (with trippingly fleet passagework in its center) and in G♭ Major (with swinging double-stops and again in superior recorded sound) lead to Pablo Sarasate’s popular arrangement of Chopin’s Nocturne in E♭ Major. David Hochstein’s arrangement of Brahms’s Waltz in A♭ Major sounds downright mesmerizing at its relaxed tempo. A soulful reading of Max Bruch’s Kol Nidrei (the portamentos in this work seeming perfectly appropriate to its cantillation) leads to the program’s conclusion, Elgar’s miniature La capricieuse, which seems to have fallen somehow outside Huberman’s interpretive purview, at least in its staccato outer sections, although the central singing section’s absolutely compelling.

This particular package by Pristine of a dynamic sonata performance with compelling ones of some of the repertoire’s most effective miniatures belongs in the collection of everybody who can even identify the picture of a violin. It’s one of the great recordings of all time.

This article originally appeared in Issue 40:5 (May/June 2017) of Fanfare Magazine.

I obtained this from Pristine Audio and immediately set about writing a review, as the “Kreutzer” has long been one of my desert island discs. I then noticed that Robert Maxham reviewed it in Fanfare 40:5, and concluded his review with the following sentence: “It’s one of the great recordings of all time.” Well, that does about sum it up. I wouldn’t even take up additional Fanfare space except that I so firmly believe that this is a recording that all music lovers should own and I felt it was worth calling it once again to your attention. It is currently sitting on my short list for the year-end Want List.

The “Kreutzer” is a one-of-a-kind performance by two artists who were extremely individualistic in their music-making, but who also knew how to listen to each other and to integrate their individuality into a unified concept. “Old-fashioned” techniques like portamento and rubato are applied to a far greater degree that one would here in today’s more “puristic” (or, if you prefer, “sterilized”) world. This is seat-of-the-pants playing, but not once do you feel that it is vulgar, or purely theatrical for the sake of showmanship. It is a performance that approaches the music as if it were a brand new piece being discovered as it is being played.

The miniatures show the charming, witty, and virtuosic aspects of Huberman’s art. It is an art the likes of which we are unlikely to encounter again, and we are the poorer for it. If you love the violin, this disc is not optional. It is essential, especially in Mark Obert-Thorn’s remarkably clear and full-sounding transfer, which is leagues beyond all prior versions.