Legendary recordings of Beethoven's Late Quartets by the Hollywood Quartet

One can only express regret at the belief of the Capitol executives in 1957 that stereo would never take off, and therefore it was not worth recording on two channels - it can only be assumed that they rarely if ever ventured into their own studios to listen to the difference. Thus this legendary set remains firmly a mono issue - though in this Pristine remastering our optional Ambient Stereo processing does as least create a sense of air and space around the players.

Of greater influence on the sound quality is the re-equalisation of XR remastering which has made huge improvements to the tone of the entire set - no longer does this need to be listened to quietly! 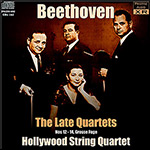 This set became something of a legend in its day and had it not been for the fact that it was made in the last days of mono LP, it would have remained longer in circulation. Of course, many other fine Sets have since appeared, principally those by the Végh and Talich Quartets, as well as the Quartetto Italiano. The present set, like the Busch, must be regarded as a complement to them rather than a substitute. It is hardly necessary to remind readers that the Hollywood Quartet flourished briefly during the early years of the mono LP but I do so in case the reissue of the Schubert C major Quintet, the Brahms F minor Quintet along with the Dvofák Op. 96 and Smetana E minor Quartets escaped your attention. The members of the quartet all belonged to various Hollywood film studio ensembles and they possessed superb attack, generally flawless intonation and beautifully blended tone; the enormous reputation they rapidly acquired once their records began circulating beyond the West Coast of America is thoroughly vindicated by these reissues. I have found it advisable not to play these discs at too high a level: the opening of Op. 127 sounded far too 'symphonic' and almost overblown, for these recordings were not made in a large studio and though the sound is good, a slightly lower level setting removes some of the glare from Felix Slatkin's tone above the stave.

On the third disc, the first five movements of Op. 130 are accommodated on the first side and the Grosse Fuge is placed before the final Allegro, so that one can complete the quartet as one wishes. The first movement is superbly played without any attempt to overstate feeling (the exposition repeat is not given). IJ found the Cavatina "rather too quick" and I am inclined to agree with him. The Grosse Fuge is stunning, The last record gives us Op. 131 and the opening fugue could perhaps have had more Innigkeit though it has marvellous tone and feeling.. Even if there are times when one feels certain passages are overdriven or larger than life, there are so many more where admiration is unqualified and one simply relishes the splendour and purity of this quartet's playing. They are human too: there is actually some less-than-perfect inton atton after the second statement of the theme in the finale of the A minor, Op. 132. These are performances of stature and deserve a warm welcome back to the catalogue. They come with fine notes from Desmond Shawe-Taylor and the surfaces are admirably smooth.

A unique opportunity of hearing the late Beethoven string quartets is afforded by the issue of three complete recordings, by the Hungarian, the Budapest and the Hollywood string quartets. It is most interesting to hear the different points of view and to try and decide which interpretation gives the greatest satisfaction. In these works lies almost every mood that music can depict. One of the problems of recording, as of broadcasting, is how to deal justly with the rugged or even rough moments that occur in much of Beethoven's music. Players and recording engineers have to decide how much the microphone will take; it is no use playing such moods as exist in the Grosse Fuge and in the last movements of the C sharp minor and A minor in a polished manner—they are full of passion and are, in places, almost wild. A "pretty" performance of Beethoven is unthinkable; neither he nor his music was ever pretty!

Grosse Fuge. Opus 133, Hollywood String Quartet
This opens with terrific energy and finely contrasted tonal strengths and the part-playing is clear and well phrased. When the turmoil subsides the meno mosso comes as a great contrasting relief, with wonderful calm. They make much of it until the Allegro 6/8 which fins off with capital rhythmic grip. They then maintain a strong feeling of tension throughout all this turbulent section and a huge climax is achieved, not only in the music, but also by the players. The following quiet section has glow and intensity—they seize the differing moods wonderfully and altogether it is a marvellous performance.

To me it has been most interesting to hear and compare these performances of the late Beethoven string quartets—having played them, listened to them and even coached them for very nearly sixty years—with enthusiasm and gratitude keener than ever. Actually to interpret them is the problem which demands a far greater penetration and understanding than is needed to surmount the technical difficulties, great as these are. But if one makes friends with these works, they never cease to reveal fresh marvels, unsuspected humour, even " leg-pulls " (the last movement of the Opus 135 for example), the shocks and surprises of the first movement of the same work.

From the untold marvels and depth of eloquence of the variations of the C sharp minor abruptly into the simple fun of the Scherzo, with its four undeveloped themes in the Trio of that scherzo, and so on ; every work has its treasures that will last longer than any human lifetime and will continue gradually to reveal themselves. And so one could continue pointing out the many rare treasures that are enshrined in the whole series of the string quartets. Beethoven was always the master, the prophet, the seer—the bringer of visions of beauty that are at least as great as those existing in any other art, and allow us to "look beyond ".

I.J., The Gramophone, May 1958, excerpts from lengthy review contrasting three issues of the Late Quartets