"This is grand chamber-music playing and thinking" - Gramophone 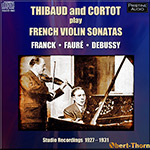 This is a re-recording of the old DB785-8. Each movement is on one side [he means to say "disc" here!]. This is grand chamber-music playing and thinking. Our usual regret has to be expressed : Cortot does not record as well as many pianists of smaller capacity of mind and heart. Yet in the most vigorous work in this sonata he will, I think, be esteemed as highly as the finest recorder, for he has a great brain and a nervous sensibility of uncommon power and penetration. Those who do not know the work may perhaps try the second and fourth records. There is a queer harmonic in the piano's final chord. In the breadth of the rhapsodical playing, and the right appreciation of the work's size and scope, these two players seem to me splendidly matched, Cortot perhaps taking first place for his intellectual grasp. It is a pity that the tone with which the first side opens is not very good. That must not be allowed to put people off, nor must the thought of the music, much of which is gloriously direct. That last canonic tune, for example, is the sort of thing that sticks ; you find yourself humming it days afterwards.

(For what it's worth, we disagree wholeheartedly with Anderson's criticism of the tone of this recording! In this case we have to allow him a certain leeway - the equipment he had for reviewing recordings would be a long way away from modern reproduction standards! Furthermore, the quieter pressings used for Mark Obert-Thorn's transfers may also contribute greatly to the fine sound quality heard in this new issue, as our online sample demonstrates.)

The French duo remind us that Fauré's music has a very considerable toughness of character, and Cortot in particular brings this quality out by the rhythmic strength of his playing, and by ensuring that each note in the piano part is given its full value and importance - Fauré was an economical composer and every detail of his scoring tells effectively. The expressive, almost passionate quality of the music is also superbly realized, yet Thibaud and Cortot know how to balance the Sonata's emotional content with its classicism and Gallic restraint.

Debussy's startlingly original, pathetic, ironic Sonata, the last work of a mortally ill genius in despair at the events of the First World War, is brilliantly caught by Thibaud and Cortot, who respond with great sensitivity to the work's rapid changes of pulse and mood. In the Franck Sonata Thibaud's portamento, slowish vibrato and warmth of tone suit the piece to perfection, and again he and Cortot illuminate the work with their insight into the composer's world. These two players spent their formative years in a musical environment which all three composers inhabited and their performances are immensely satisfying and highly authoritative.