"I carry great memories of the recording of the Second Quartet of Fauré which I made with my friends Jacques Thibaud, Maurice Vieux and Pierre Fournier. We had played it in public a week beforehand for the Société des Amis de Fauré. Maurice Maréchal had played the cello. It was on the tragic morning of the 10th May 1940 that the recording was due to take place. Bombs had been falling on Paris all night. At eight o'clock I switched on the radio and heard: 'M. Frossard [a Minister at the time] is speaking to you.' Silence, then: 'Holland has been invaded.'

Roger Thibaud, Jacques' son, was in the front line in this area. I feared the worst when I went to fetch Jacques Thibaud to go off to the Pathé-Marconi studios in the Rue Albert at the far end of Paris. He already knew the unhappy news.

Overcoming our mortal fear with that courage that artists so need, we started our recording in an extraordinary atmosphere. Never had Thibaud played so well. We were all overwhelmed. Swept up by the music beyond the reach of the present time, we succeeded in the tour de force of recording, without any lapse, the entire Quartet in one day. It was sublime. After the astonishing Quartet, where the piano assumes the leading role, the red light went out and Jacques Thibaud, whose humour had not left him, put his hand in his waistcoat pocket, took a two sous coin from it, put it on the piano and said to me: 'What you have just done there pays well, my dear Marguerite.' Poor, dear Jacques, he had no inkling that, two days later on the 12 May, destiny was to take his son from him.

When, many years later, I played this record to my friend Gilels, the great Russian pianist, I could not hide my emotion. He was still enraptured, seeking words to express his feelings, and finally he said slowly: 'That, Madame, is one of life's great moments.'"

Marguerite Long is perhaps the French pianist most closely associated with the music of Gabriel Fauré - a virtuoso who studied and worked for a decade with the composer and dedicated her long and successful career to the promotion of his (among others) music. The three recordings here span some 16 years and reach almost to the end of her recording career with respect to the composer - she went on to make a small number of solo records in 1957.

It has been particularly rewarding to restore the 1940 recording described above which, in its original state, sounded particularly dim and boxy but, with XR remastering, has blossomed into a glorious rendition of this fine work which only occasionally shows its age against the other two. The 1956 recording was, as one might expect, a much more straightforward project, though this too has been considerably enhanced, with much greater depth to be found than originally expected, as well as a fine treble extension.

Long regarded the Ballade as her own, and recorded it five times. The 1950 recording with Cluytens was remade in 1952 but it seems has appeared only on CD - meanwhile the 1950 recording shows its "made for 78s" origin with some rather crude side changes and sonic variations between the sides, despite being sourced from LP, which I've had to deal with. Originally paired with Ravel's Concerto in G major, the release was awarded the Grand Prix de l'Academie du Disque Français in 1953. 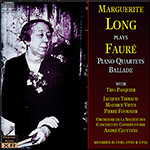