When one considers all of the recordings made in the post-1925 electrical recording era, but before the development of full frequency range recordings in the 1940s, there can be few instruments more suited to the restrictions of the technology at the time than the cello. The range of frequencies required to capture it well, thanks to its low register, generally falls within the capabilities of 1930 disc recording, and this makes it a prime candidate for XR remastering. I've already had considerable success with Casals - his 1938 recording of the Dvorák Cello Concerto (PASC 246) beat all others, old and new, to become Gramophone's recommended recording of the work in February 2011.

However, nothing prepared me for the possibilities lying hidden in the grooves of his Cello Suites recordings of 1936 to 1939, which have surpassed all expectations. I was already familiar with issues on both EMI and Naxos (the latter a considerable improvement on the former), but neither offers the listener the full-bodied tone of Casals' cello, the crispness of his sound, the sense of immediacy and clarity which lay hidden in these recordings for so many decades.

My first task was to take the disparate recordings and bring some homogeneity to the sound of the instrument - each suite was initially processed separately, using a common reference in order to iron out differences in the recording equipment and locations used during the recording sessions. Thereafter I brought them together to continue what was at times a tricky restoration - revealing so much musical detail also reveals much else that is unwanted. Occasionally this may still be heard, but it should not distract you from one of the most remarkable restorations it has been my pleasure to undertake. 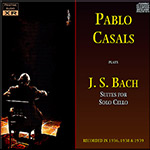 In these really splendid recordings, we have, if at one remove, the finest fruits of his great art.

The sixth and seventh volumes of the Bach Society, which was formed by H.M.V. in 1934, contained the first, second, third and sixth Suites for violoncello and this new volume, postponed for issue until now on account of the war, completes the Series with the fourth and fifth Suites.

Fred Gaisberg tells us in his book, " Music on Record," that Casals, at the age of thirteen, picked up a volume of the Bach Suites in a music shop while looking round for some pieces to enlarge his repertoire. He was then playing in a restaurant and had persuaded the proprietor to devote one evening to chamber music. In later years Casals was, Mr. Gaisberg says, "the first of all instrumentalists to play an entire Bach Suite at a public concert "—a quite common occurrence to-day—and it was the Suite in B flat major, No. 4, that he once played to an audience of many thousands at the Albert Hall. It is to Mr. Gaisberg that we owe, amongst so much else, these magnificent records of a performance that perhaps has never been and now certainly could not be equalled anywhere in the world.

One can only guess at the immense labour and self-discipline that lay between the day when Casals first saw this music and his eventual mastery of it. I should be sorry to think that these records might only come into the hands of 'cellists, for whom their acquisition is a foregone conclusion, and be avoided as a kind of caviare by the ordinary music lover. I would beg him, or her, to try, as samples, the Courante of the fourth Suite or the Prelude of the fifth.

This music, relying, except very occasionally, on the single melodic line (for harmony is rare) is a grand antidote if one has been soaking in luxuriant harmony or become conditioned to short-breathed melody. It is a discipline to listen—and it means genuine and concentrated listening—to this music : but the feeling of it being a discipline soon gives way to a sense of exhilaration and musical well-being. The Prelude of the fourth Suite, for example, begins like a technical exercise but this is arrested by a pause after which, as Professor Westrup says in his excellent notes, "the music acquires an unexpected eloquence." The Sarabandes in both Suites are of great beauty, the first being dominated by a dotted rhythm which Casals makes amazingly expressive. Above the Sarabandes of the other Suite, a simple melodic line with a falling cadence very characteristic of Bach, there seems to hover another tune which we hear only in our mind's ear.

But each movement has its special beauties and one can no more describe these than the superb playing which brings the music to life. The light and shade, the use of rubato, technical things such as these are applied with magical skill but it is the end to which they are applied that so deeply affects one, the noble expression of this highly wrought and noble music.

Listening to these records, and especially to the fifth Suite, which is perhaps the finest of all, one realises afresh what our musical life has lost by Casals' refusal to play in this country but at least, in these really splendid recordings, we have, if at one remove, the finest fruits of his great art.