A few months ago I received a call from one of Pristine Classical's regular and long-standing customers, Prof. Jack Kamerman. Amongst other things he had to discuss, he was especially keen to recommend to me the recording made by the London String Quartet of Schubert's C minor Quintet for the Schubert centenary of 1928. In Prof. Kamerman's view this was one of the truly great performances of this work - one that had been remarkably well recorded for it time, and one which appeared to have been completely overlooked and not since reissued.

All very interesting, I replied, but would you happen to have a copy? At this point these conversations usually come to something of a halt, or a vague promise to look out for one, or the admission that the caller's discs are either worn out, broken or scratched beyond use. But no, here we had not only a good set of discs, but a good transfer of a good set of discs - would I like him to post me a copy for evaluation?

When I received the CD I realised quickly that he had a very strong point. Despite a slightly rough start in terms of disc quality, the transfers were excellent and the playing marvellous, with the quartet sounding both of and ahead of its time. A forgotten treasure indeed, and one which has responded exceptionally well to XR remastering. The playing is for the most part crisp, precise and highly accomplished, whilst the recording is generally clean with an unusually well-extended treble response marred only occasionally by a slight peak distortion that comes (when it comes) as quite a surprise - and reminds you that this is a recording from the 1920s and not significantly later.

This is not the first recording to me made of Schubert's Quintet - that honour went to the Cobbett Quartet in an acoustic recording for the NGS some three years earlier - but the London String Quartet's take is miles ahead of its predecessor in almost every way, and shows what one of the top chamber ensembles of the day was really capable of. A recording to treasure.


Recorded 18-19 April, 1928
Issued as UK Columbia 9485-9490, US Columbia set M95
Transfers supplied by Jack Kamerman from US pressings
XR remastering by Andrew Rose at Pristine Audio, June-October 2010
Cover artwork based on a photograph of London String Quartet, c.1931
(NB. At this stage Warner had been replaced in the quartet by William Primrose)
Total duration: 43:30 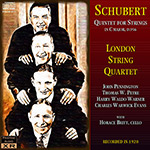