SMETANA String Quartet No. 1 in E minor, "From My Life"

The first great string quartet of the 20th Century

Mark Obert-Thorn completes the digital transfer of their electrical catalogue

The Flonzaley Quartet made its first recording attempts in 1913 for Victor, but its earliest issued discs date from five years later.  From that time until its disbandment in 1929, the Flonzaley was the première string quartet ensemble on the Victor/HMV family of labels.  They recorded prolifically, with 32 acoustic and 92 electric sides published during the 78 rpm era, as well as another 11 sides that were first issued on LP or CD.  Even those numbers pale in comparison to the 860 total matrices they recorded.  Their quest for perfection is evidenced by the high take number (13) on the medley of two Spirituals presented here.  The issued take came only after having recorded the work over eight sessions stretching over fourteen months.

I am indebted to Jon Samuels for his discography of the Flonzaley Quartet, published in the ARSC Journal in 1987, for the details regarding dates, matrix numbers and recording venues. 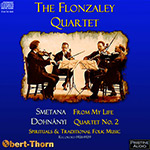 "...These are vintage Flonzaley laid down before the break-up of that excellent organisation, and left to mature till now in the cellars at Hayes. Like all dated "vintages " they have the virtue of preserving something that would otherwise have been lost irretrievably—and a performance by the Flonzaley was well worth preserving. On the other hand, an old wine is often inclined to lack "body," and these two Flonzaley samples sound strangely light and ethereal beside the full-blooded modern recordings of the Budapest. The Schumann [Quartet in A minor, Op. 41, No. 1, not included here], indeed, cannot be regarded as entirely satisfactory; the extreme notes at both ends of the gamut do not actually disappear, but there are times when they do undoubtedly "fade." And there is a curious haze over a good deal of the part-writing that occasionally makes it impossible to distinguish all the detail. The Smetana is distinctly better, and the sensationally high B, long held by the first violin towards the end of the Finale, is quite able to make its presence felt. On the whole, this is the quartet I prefer; the " cuts " are regrettable, but not of paramount importance..."

from "Additions to the HMV Connoisseur Catalogue", The Gramophone, August 1932 - note that the UK issues being reviewed came out there several years after their original US releases.