These recordings were amongst a set selected from the extensive collection of Brussels-based collector Jean-François Lambert as excellent examples of neglected European recordings of the early LP era which will appear in the coming weeks and months at Pristine. It's hard to conceive of a more delightful way to begin the series than with the Pascal Quartet's sublime readings of these two Haydn favourites.

The appearance of one of these two quartets, the D minor, Op. 76, No. 2, on a set of HMV 78s issued in 1949, gave the first clue as to the recording date of that particular recording, and further digging revealed it to have been taped in Paris in November 1948. The second quartet here, the 'Joke' Quartet, is much more elusive, and I've struggled to find mention of it beyond the MMS disc from which these transfers were drawn.

Yet I strongly suspect that it was drawn from the same recording sessions, as there is a continuity not only of both sound quality and acoustic, but also of occasional distant traffic rumble (formerly buried in the grooves) which is evident in both recordings.

Whether or not this is the case (and the second recording was most certainly made either at the end of the 1940s or start of the 1950s) it seems we have no right to expect the kind of sound quality revealed by the XR remastering of this disc, which is nothing short of superb throughout, and conveys perfectly the finest nuances in these literally delightful performances. It is therefore all the more remarkable that the 1952 issue of The Record Guide commented sniffily about those HMV 78s: "although it is well played, the string tone is very unpleasant. The issue is said to have been dubbed from a tape recording."

Well take a listen to our sample here, in which Ambient Stereo processing brings out the fine acoustic captured in this recording, and try to remind yourself at regular intervals that it's was made 61 years ago, and not in the 21st century... 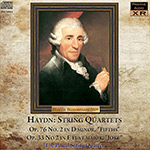