Remember the Quad 22 Control Unit from 1958? Peter Walker designed a truly great hi-fi unit of apparent simplicity that concealed a wealth of function, particularly for getting the best reproduction from 78rpm discs. Push one button and you selected the disc input suitable for LPs; push two and you were also selecting the correct equalization for Parlophone 78s. A complicated-looking table in the manual gave the correct button settings for each record label; however it also cautioned, "Exceptions occur, particularly when records are made from shared masters".

A common delusion is that the LP era rationalised the various playback equalisations and magically all the record companies had adopted the RIAA standard: end of problem. Not so. There were five years of LP production before RIAA was established and during that time - as with 78s - anything goes. And anything went. Pick up an early Decca FFRR LP and ask: what equalisation should be used to replay it correctly? - and the answer, amazingly, is one of three possibles: Early FFRR (Pre '53), FFRR ('53-'55), RIAA ('56 onwards). And these periods overlapped. And that's for a major label. (I hope to return to the subject of Decca eq in a later note.)

Move now to a small label, possibly using more than one generic cutting firm each with different setups; add in the "shared masters" comment we mentioned above from Quad; and the question of 'correct' playback equalisation becomes impossible to answer.

In restoring the four LPs of Fauré's chamber music this problem was particularly acute. 'A Polymusic recording' says the label on the Nixa disc. What eq did Nixa use? No idea. Was this LP pressed from a shared master disc or a copytape master from Polymusic? Scratches in the runout area of the disc suggest the former - in which case the question becomes: what eq did Polymusic use? Even less idea. In such cases the restoration engineer is left with having to use two sensitive but fallible tools - his ears - together with experience, and guesswork. And all that could be said is: hope you like the result.

At least, that was the situation until a couple of years ago and the development of such techniques as Andrew Rose's XR process which - to over-simplify enormously - helps resolve equalisation problems throughout the recording chain by reference to modern recordings of undoubted quality. Again however, and this must be stressed, it is only another tool: its use has to be carefully judged, and it mustn't be abused. But hopefully we are now able to present you with restorations from the early LP period that are, to adapt Peter Walker's slogan for Quad: "a bit closer to the original sound". 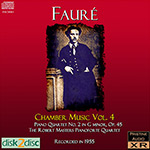