When I'm considering a recording for restoration, I usually check the contemporary reviews and ratings to see how it was judged at the time of its original release. In the case of this pancake Nixa disc, I wonder what it was they reviewed, and on what equipment? For, frankly, the LP was very rough. Yet this wasn't mentioned. Was it just so common in 1953 as to be not worth mentioning?

For example, the most obvious fault, not remarked on at the time, was a strong hum: not just 50Hz or 60Hz, but both! (Either is all too common, but both? - it's the first time I've encountered this. Not mentioned in the reviews.)

After double de-humming and heavy doses of the usual restoration medicine (end of side 1 particularly bad), the underlying recording was revealed. In all their horror were nasty shrieky strings and a piano swathed in cotton-wool and apparently in a different studio. Minor miracles were achieved jointly by Andrew Rose and self to resolve this and the result, after many, many hours of work and a final touch of Ambient Stereo, is what you'll hear here. Amazingly a very nice performance has finally been revealed, perhaps for the first time since it left the studio! 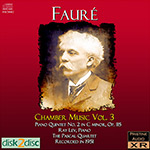