This recording was originally presented to Pristine Classical by Dr. John Duffy for inclusion in our Pristine Exclusives streamed audio service playlist. A fine recording, it had won great plaudits upon its release in 1954, and was double-starred in the 1955 issue of The Record Guide, their highest accolade.

However, time moves on, and I felt that the original sound was perhaps somewhat veiled and might benefit from a little XR remastering. I quickly put together a rough remastering and sent this across the Internet to Dr. Duffy. The title of his response - "Revelation" - says it all, and I decided this recording really merited a full release.

Taking Dr. Duffy's transfer as my source, I then proceeded to produce a full XR Ambient Stereo master. This proved more time-consuming than I had expected - not only did the high-precision re-equalisation lift a veil from the performers, it also exposed the inevitable weaknesses in the medium - mid-50's vinyl, which then required further restoration over and above that which Dr. Duffy had already so expertly dealt with.

The result, I feel, is a triumph - both musically and in performance - and also as a joint restoration effort. Decca's reputation for high quality recordings was rightly lauded, and this is an excellent example of that. Very highly recommended recordings of some little-known but excellent chamber music. 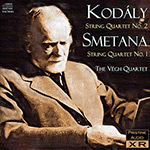