First in a Fauré series remastered by Peter Harrison

Some residue may still be heard on critical listening; but I think that the artistic performances justify the re-release and I'd urge anyone who isn't familiar with these musical by-ways to give them a try: they're pieces that are well worth getting to know. 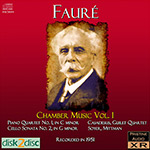