Wolf's completed writing for chamber ensembles is exceptionally thin on the ground - we present it here in its entirety - remarkable for someone who wrote an enormous body of work for other musicians, and in particular of course, singers. However the New Grove Dictionary of Music and Musicians, in listing Wolf's String Quartet as the first of his chamber music, notes that three fragmentary items did precede it.

The Quartet remains relatively unknown. Described by Burnett James as "a fervent, passionately romantic work with the first two movements conceived and executed on the largest possible scale", it got off to a bad start with the players Wolf had hoped would première it. Piqued (as many of their contemporaries were) by an attacking critical review by Wolf in the Viennese press, the Rosé Quartet not only refused to play it, but bluntly told the composer that he could collect his manuscript from the door-keeper of the opera house.

The Quartet was composed over quite some time - the first movement of 1878 was written just after Wolf had contracted syphilis, and shows clear Beethoven influences; two years later he wrote the second, slow movement, in which Wagner is invoked in a symbol of redemption. The first two movements are vast - between them there's over half an hour of music - whereas the latter two movements together are shorter than either of the first, though the intensity and vigour of the first two is maintained throughout.

Very few recordings exist of this Quartet - unlike the Italian Serenade, which appears in the repertoire of a number of performers - and I'm delighted that Peter Harrison managed to pull this excellent recording out of the hat. He noted that the original LP appeared to have been recorded in perhaps five separate sessions, one for each of the movements of the Quartet, plus another for the Serenade, and one of his restoration goals was to reduce the occasionally pronounced sonic differences between each recording so as to produce a satisfying whole. We have issued this as an 'XR' recording - in this instance, detailed analysis and XR equalisation information was collected by Andrew Rose at Pristine Audio and passed on to Peter to serve as the basis of his final re-equalisation of the recording. We think the end results were worth the extra effort! 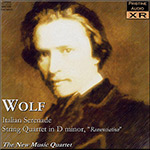