This recording, made the day after Rudoph Serkin and Adolf Busch had recorded Brahms' 2nd violin sonata, was one of a series of Brahms recordings Busch and Serkin were contracted to HMV to record during the early 1930's, though it would be a further 16 years before they tackled the first of Brahms' Piano Quartets, and no recording of his third was ever made by Serkin.

The discs themselves, although immaculate copies, showed varying problems of swish, variable surface noise, and in parts a rather murky sound - much of which can probably be put down to original mastering difficulties. As always the goal has been to iron out these variations whilst preserving as much sound quality as possible, so that the finished transfer doesn't interfere with hearing superb musicianship and believable instruments, and I hope you'll find that this goal has been successfully achieved. 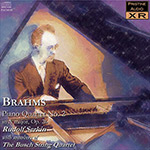