The original notes that came with HMV's are a valuable indication of the importance accorded to Bartók during the composer's lifetime, and give a fascinating insight into the contemporary response to his music:

"THE days for regarding Béla Bartók as a promising young composer have passed long ago. He has reached an age (he celebrates his 60th birthday in 1941) at which it should be possible for the musical world to estimate his true worth with a reasonable degree of accuracy: yet so far there is no concensus of opinion either among professional or amateur musicians. In the last two or three years there have, however, been distinct signs that informed amateurs and a few far-seeing professionals are agreed that Bartók is one of the few great composers of the 20th Century. The healthiest indications are the way in which music-lovers are sorting out for themselves the sheep from the goats of his extensive output, and that they are agreed as to which works represent the composer at his best.

It was Bartók's misfortune that in the period which followed the cultural eclipse of the 1914-18 war his name was linked with Stravinsky's. (The musical public's passion for linking composers together in pairs like partners in high-class haberdashery firms has more than once resulted in the misjudgment of one of the partners. Haydn is only just shaking off the handicap which writers have imposed upon him by pairing him with Mozart: Donizetti and Bellini have both suffered from the association forced on them by history: and there is no hope for a proper appreciation of the strengths and weaknesses of Bruckner and Mahler until the plain man realised that the only factor common to these two composers is that each produced nine symphonies of unusual length.) Bartók's reputation has suffered by the unreasonable association of his name with Stravinsky's. There was a brief period in which Bartók produced some percussive pianoforte pieces which bore superficial resemblance to the Russian composer's works written at about the same time, but in their major works there are hardly two eminent composers of our time less alike in style and mentality than Bartók and Stravinsky. If a contemporary parallel must be found for Bartók, the only just comparison is with Sibelius. The two composers have both suffered neglect and misunderstanding because their very different manners of musical utterance are so personal and individual that their music cannot be measured by the foot-rule that suffices for their lesser contemporaries. There is in both case and cause a certain resemblance. Until records made it possible for us all to listen time and time again to Sibelius' greater works until we had become accustomed to the directness and unusualness of his musical language, his quality was almost entirely unrecognised. The practical listener who was not accustomed to the Sibelian manner came away from hearing any of that composer's masterpieces with the feeling that although he had not grasped the work there was "something great about it." So it is with Bartók. Both composers, too, have been regarded as uncompromising in, their later works. Sibelius' fourth symphony was received with complete silence when first performed at Copenhagen, and with utter bewilderment when it was first given in England - for years it was regarded as being so laconic and knotty that its composer must be a northern barbarian ignorant of the polite ways of civilised music, and even those who had grasped the Third and Fifth symphonies confessed themselves unable to grapple with the austerities of the Fourth.

Tbe publication six years ago of gramophone records of Bartók's First Quartet was the first stride forward in the widespread understanding of his genius, and those who have lived with these records and experienced the repeated fine performances which only the gramophone can provide share the conviction that that work is one of the greatest chamber-music works written since Beethoven's last five quartets. The comparison with Beethoven will surprise those who have not closely studied Bartók's first two quartets, but these two works, different though their purely musical idiom is from Beethoven's, are the only works written for string quartet which have a comparable masculine strength, austerity and sensitiveness, and which approach the mystical world which Beethoven's posthumous quartets inhabit..." 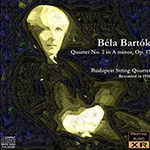