"Of the two sonatas cellists (and their audiences) seem to prefer the F major for its passion and its effectiveness, qualities less marked in the much earlier E minor work. No. 1 can make an effect, to, if played with the abandon that is possible only after intensely detailed care and abandon."

Thus the second edition of The Record Guide in 1955 summed up these two cello sonatas. Earlier this year [2006] we issued the 1934 recording of the first sonata made by Feuermann and van der Pas (PACM035) and perhaps Feuermann has the edge over Starker for the kind of abandon referred to above, a performance which allowed his natural genius to come to the fore.

But that is not to belittle this later recording - the warmth of Starker's lower registers and singing clarity as he moves higher is beauty to behold. The performance is wonderfully constructed and leaves the listener with few reservations beyond a slightly clangy piano tone during louder periods.

And of course this release, coming as it does from an LP rather than 78rpm issue, has the advantages not only of a full frequency response, but also the inclusion of the Second Sonata. And for me it is here that this recording really comes into its own - one senses that it is the later work which really inspires one of the great cellists to produce a recording worthy of his talents. This is truly a performance to savour, as Bogin too is lifted to achieve higher things in his piano accompaniment.

This recording is complemented by the five Beethoven Cello Sonatas, on Volumes One and Two, in bringing together on Pristine Audio the complete recordings by Starker and Bogin as a duo. 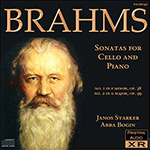