Following the effective resignation of his Berlin post, Mendelssohn was happy to return in 1845 to Leipzig, where the King of Saxony had requested he resume his former post. Despite growing ill health the warmth of his reception in the town must have done much to lift his spirits - the season got off to an excellent start with a first concert at which Clara Schumann played and Mendelssohn was greeting back with spontaneous enthusiasm.

Of his two Piano Trios, as observed in previous notes, this second has perhaps the edge over the first, with stronger material in the outer movements, a lively scherzo to match the earlier piece, though perhaps not quite the same heights of lyrical perfection achieved in the slow movement.

In this recording we are grateful to Parlophone enthusiast and long-time friend of Pristine Audio, Mr Keith Claxton, for unearthing a forgotten gem from this distinguished trio of German academics, which we understand to have been recorded in 1930 and issued two years later in the UK on the discs from which our transcription was taken. Once the listener adjusts to the slightly "underwater" ambiance of the piano this is surely a performance worth hearing again. 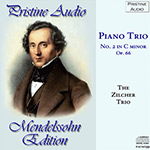