This wonderful recording of Debussy's 1915 Sonata for Cello and Piano is without doubt one of those lost gems we love to discover and remaster for Pristine Audio Direct. It is one of those rare occasions where the resources of both myself and Peter Harrison have been pooled to bring you the best possible sound quality from this recording.

Though information is scant, we believe the recording was originally made for 78rpm discs in the late 1940s, and was shortly afterwards transferred for vinyl issue. Thus Peter carried out the initial transcription and dealt with the worst of the vinyl noise, leaving effectively a pretty good 78rpm transfer for me to then tackle.

Those with a good knowledge of cellists will need no introduction to Raya Garbousova (1909-97) - she was without doubt one of the foremost instrumentalists of her generation. Take a listen to our sample of the finale of this short sonata to get a taste of her full command of both her instrument and the music.

Born in Russia, she was a prodigy, playing in Moscow and Leningrad by the age of 15. The following year she went to Leipzig with the intention of studying there under Klengel. After a three-hour interview he declared that as she already knew everything she could not be his student! In the years which followed she was reponsible for many premières, including sonatas by Martinu and Prokofiev, and the Barber Concerto, commissioned and written for her.

Her accompanist here, Artur Balsam, features on a number of recordings available from Pristine Classical - the pairing here is exquisite. 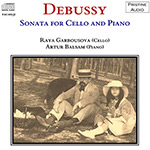 If Madame Garbousova's embonpoint is to your taste, this will be an ideal recording of the work

The Debussy Cello Sonata is one of the three late works Debussy completed out of a projected six before cancer claimed him in 1917. Like the other two works, it is somewhat mysterious, spare, elliptical and points toward Stravinsky and Webern. To me it is a Pierrot, not moonstruck like Schoenberg's nor amorous and light as from the Commedia dell' Arte, but moody, gray, ill-nourished and neurasthenic. It is an older brother to Ravel's Scarbo.

Madame Garbousova's performance is exceedingly well played, but does not fit my conception of the work. Her Pierrot seems to have married well and to have just been elected a Provincial Councillor in a Department in Southern France. Her cello tone is very full and romantic in the first movement with superb cello pizzicati in the second. The third movement serenade is closer to my ideal; one is reminded that Spain was an almost unvisited distant love of Debussy.

I must also add that both the cello and piano sound is very fine, and if Madame Garbousova's embonpoint is to your taste, this will be an ideal recording of the work.