BORODIN String Quartet No.1 in A major

Alexander Porfir'yevich Borodin (1834-1887) described himself as a "Sunday musician"; professionally he was a medical scientist, with music relegated to his spare time. Alas this was music's loss, as his relatively sparse output shows fabulous creativity and craftsmanship. A member of the "Five" with Moussorgsky, Rimsky-Korsakoff, Cui and Balakireff, he is often ranked second behind Moussorgsky in greatness - had he written more this might be reversed.

A keen cellist, a regular player in quartets and lover of chamber music, it seems odd that he wrote only two string quartets, and both late in life - the first in 1878, the second two years later. Yet when Moussorgsky heard that Borodin was working on a string quartet he reacted in horror - this went completely against the Five's rejection of western European musical forms in favour of national Russian themes.

When one looks at the current catalogue one finds far more recordings of the second than the first quartet. Yet the sleevenotes to this recording state: "Though rich in sensuous melodies, Borodin's Second Quartet has not the same enduring qualities of his First." Little did that writer realise that the second was about to become far better known, thanks to its use in the musical Kismet, which premiered on Broadway in December, 1953.

This leaves the first quartet somewhat out of the limelight - and yet those original sleevenotes have a point. There is much in this quartet to admire - the contemplative opening building to a movement of great passion, the haunting beauty of the second movement, the ethereal quality of the third, which has been suggested describes elfin pipers above the rustle of woodland leaves, and the wonderful finale, building again out of a slow introduction into an Allegro risoluto which is as resolute and passionate as the marking suggests.

Peter Harrison has again made a superb job of restoring and remastering from early vinyl source material which had a tendency to blast during end-of-side peaks - the Vienna Konzerthaus Quartet give this recording their all! A superb performance of a fabulous piece. 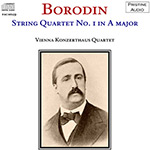 They play superbly, keeping up with the intricacies of Borodin's counterpoint and thematic variation

Borodin was the only member of the Russian "Five" (Mussorgsky, Rimsky-Korsakov, Cui, Balakirev, Borodin) who, had he never written a note of music, would still be a famous man. As one of the outstanding Russian chemists of the 19th century, Borodin was a great teacher and wrote a seminal textbook that was still in use in Soviet universities in the 1920's. He always considered himself a scientist first and only an amateur musician. He generally composed only when he was sick and could not perform his academic duties. His musical friends often half-jestingly greeted him with the wish that he was not too well.

A very small but very distinguished set of masterpieces emerged from Borodin's pen: the second symphony, Prince Igor, particularly the overture and Polovtsian Dances, On the Steppes of Central Asia, and the second quartet. These works conveyed a truly original Russian Bardic sprit and contain unforgettable melodies. The first quartet, although very finely crafted, is not in that league. Rather than evoke the gathering of the Polovetsii, it conveys more the spirit of the gathering of academicians at the University of Breslau.

The quartet is in four movements. The first movement begins with an adagio intoduction which does possess a soupçon of Russian flavor. The three main themes of the movement are attractive but do not grip the heart. Their brilliant working out is worthy of Mendelssohn, but freer, more contrapuntal, more subtle. The andante essays a folk-song-like manner, but if it is based on a folk song, it conveys little warmth or passion. The scherzo, as is usually the case with Russian composers is very good; brilliant, assured, and somewhat catchy. The finale is vigorous with much repetition and lively rhythms. The quartet is well worth hearing, but lacks any melody the like of which the second quartet has in abundance. The quartet, while not a masterpiece and somewhat academic, is far superior in my view to the Tschaikowsky Quartets #2 and #3.

I first became acquainted with the Vienna Konzerthaus Quartet in the 1950's as they pionered the Haydn quartet repertoire for Westminster Records in the same way that Hermann Scherchen was introducing us to Haydn symphonies on that same label. They play superbly, keeping up with the intricacies of Borodin's counterpoint and thematic variation.

The sound is clear and detailed, sounding like a very good mid-1950's monaural recording.