Unlike the Quintetto Chigiano's other early 1950's recordings for Decca, we can find no evidence of this ever reappearing in any form after its initial release. It was among the first batch of LP records issued by the company in 1950 - their LXT series started at 2500, and this was the twentieth.

Perhaps the main reason for its absence from the later catalogue is the persistent pitch variation throughout the original, something that closer analysis has revealed to be a product of the original master recording and not of later poor pressing or disc mastering. Indeed, this would explain its absence - if a master disc shows errors a company can return to the master tapes and remake it. If, however, the problem is intrinsic to the master tapes then perhaps one needs to wait 56 years until the technology is in place to correct the problem!

The record exhibited a double-wow througout the recording. In other words, for every rotation of the disc, the pitch twice varied up and down by +/-0.15 semitones. We have yet to figure out quite how this could come to pass but have some possible ideas. What we do know is that the 'wow' affected the masters as the its up and down cycle is clearly and visibly interrupted each time there is an edit made in the recording.

Thus restoring this recording produced real problems for the restorer, Peter Harrison at disc2disk. Below is a graphical representation of two section - the 'before' is on the top and the 'after' is below. You'll see the noise and clicks on the top picture as one would expect from an old LP. But look carefully at the horizontal lines - the first four seconds show the end of the strings opening - then there's a clear change in the music at the piano solo entry.

In the top picture the notes, particularly the harmonics about halfway up the screen, look a little like tadpoles - in the bottom they've been straightened out. The wiggle illustrates the 66 2/3 rpm wow we found on the original recording - over 2400 of them on the complete Quintet, which have been carefully 'de-wowed' one - or a few - at a time. Although I've stated that this occurred regularly, in fact the precise timing of the wow could vary minutely from cycle to cycle, and thus a simple fix for the whole 36 minutes was not possible - each section of processing had to be individually addressed and adjusted to fit the precise nature of the problem at that point. The finished product is quite remarkably stable - something the Decca engineers of the 1950's would have considered a miracle - and even today I find an astonishing achievement on the part of Peter Harrison. 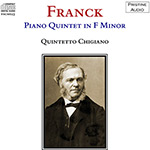 Perhaps I should just let my heart take over and say that as in its later recording of the Brahms F Minor Piano Quintet (PACM010), this recording is one of the greatest performances of a chamber work I have ever heard with sonic reprocessing that fully matches its artistry. Anything else I write below is just intellectual gloss.

The Franck quintet announced its composer's arrival in the ranks of world-class composers. Two people were much discomfitted at its premiere. His wife, who sensed in the surging passion of the first movement a transfer of his bourgeois religious emotion into something rather more earthly. The pianist, Camille Saint-Saëns, who was the reigning instrumental French Composer and whose very temperate aesthethic went well with the times, was disgusted with such a naked display of passion. No succeeding Franck work wore its heart so much on its sleeve; by the Violin Sonata (perhaps the greatest of all violin sonatas and Franck's greatest work) the passion and the classicism are fused into a noble whole.

The Quintetto Chigiano find the golden mean between spontaneity and line. They play with immense integration. At the very beginning, when the four strings play fortissimo and with the utmost tension, the piano enters very relaxed and beautifully. In most performances, the piano enters as from afar--some other planet--but here the piano enters as a feminine spirit but from the same family as those very agitated and "up-tight" strings. But later on in the first movement, it is the strings who attempt to calm the piano. There is never a gulf between them; they are really one voice. Technically, they are incredible, but it is their spirit which gets to me.

I wish I knew what happened to this group. Why did they not make a great career for themselves?