"The Chigi Quintet play both pieces to perfection" - Gramophone

Despite his prolific output - nearly 500 works, including 102 string quartets and 125 string quintets, the music of Luigi Boccherini (1743-1809) has always stood somewhat in the shadow of his great contemporaries of the classical era, sometimes rather unfairly regarded as falling somwhere between the styles of J.C. Bach and Schubert.

However, there is a distinct originality to be found in Boccherini's music. He was a well-travelled and cultivated man, a well-toured cellist who spent much of his life in Spain, before and after service as court chamber composer to Frederick Wilhelm II of Prussia. However it was mostly during the later part of his life, back in Spain as organist to the Kind, that the bulk of his chamber music was composed.

By this stage in his life he had established a friendship with Haydn, whose music he greatly admired, and this seems to have deepened his musical style. However, it is here, in these Piano Quintets, that we see possibly the true fruits of his work, with perhaps the first effective synthesis of piano and string quartet where each works more or less as an equal partner, and the cello is freed from its traditional basso continuo form of duplicating the keyboard's left hand.

Boccherini left two sets of six piano quintets, of which these come from the latter, written in 1799. Whilst they weren't to set the world on fire in the way Schumann achieved some 43 years later they are certainly well worth knowing, and in this recording by the Quintetto Chigiano, double-starred in The Record Guide of 1956, they receive a superb world premiere recording. 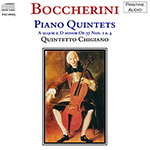