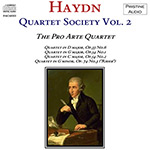 I now know that Haydn is the man I'd invite to dinner and I now want to plumb his genius...

In reviewing the first volume of the Pro Arte Haydn series, I had already indicated that I thought that Pro Arte were perfectly suited to Haydn by virtue of their classical style, their rather objective sound, their perfect ensemble and their wit. The flatness of their original recording has been more than cured by the Pristine Audio restoration (perhaps resurrection is a more apt word) and the sound is, if anything, more natural in this second volume. What really remains to talk about is the music itself.

There are four quartets on the second volume, and if no work quite equals the magnificent Op. 77 #1 of Volume 1, all four are from Haydn's top drawer.

Opus 33, #6 is a short, rather lightweight quartet that features a beautiful, first-violin driven slow movement and a witty finally. The finale's wit derives from a rather stilted rondo theme, which, with each repetition, loses more of its inhibition and whose last statement is rather eloquent.

Opus 54 #1 is a big quartet whose first movement has a rich development and a varied recapitulation. The slow movement is an insistently moving andante and the minuet is brilliant and catchy. The finale is an almost monothematic presto, a top that never stops spinning. While many composers have trouble with finales, Haydn is the finale composer, never at a loss for how to end things.

Op. 54 #2 could hardly be more of a contrast. The first movement is a richly sustained, harmonically varied, contrapuntal, stop-and-go allegro. The slow movement is agitated, harmonically dense, but rather impromptu. A cautious minuet with a complaining trio gives way to the oddest of finales: two slow sections connected by an operatic presto.

Opus 74 #3, substitled "The Horseman", starts with a galloping figure, but, oddly enough, the development is harmonic, not rhythmic. The slow movement begins so richly orchestrated that it could seem to be by Brahms. A rather workaday (for Haydn) minuet follows. The finale (from which the quartet takes its nickname) follows and it is a masterly essay in rhythmic light and shade and Haydnesque wit and power.

Like most classical music lovers, I always considered Haydn's star to be dimmed by the gigantic suns of Bach, Beethoven and Mozart. But after 60 years of listening, I now know that Haydn is the man I'd invite to dinner and I now want to plumb his genius. This release is a good place to start.