It may be assumed from the sheer quantity and breadth of Brahms' writing for small ensembles that Chamber Music was his favourite mode of expression. He uses a wide variety of instrumental combinations and numbers, but only once used the combination of piano with string quartet: the Piano Quintet in F minor, written between 1861 and 1864.

During this time the piece took at least three forms. Beginning life as a string quintet, it was also reworked as a Sonata for Two Pianos, but neither form fully satisfied the composer or his close friends and confidantes, Clara Schumann and Joseph Joachim.

Yet when one listens to this rich masterpiece as a Piano Quintet it is impossible to guess that its final form was the result of so much chopping and changing and such a long gestation. One specialist website includes it in their list of the 15 greatest works of Chamber Music ever written!

This superb performance was issued in 1952 by Decca. The Quintetto Chigiano (also known as the Chigi Quintet) was formed in 1939 by musicans from the Accademia Musicale Chigiana, founded by Count Guido Chigi Saracini in 1932 with the aim of organising Master Classes for the principal musical instruments.

Once again, Peter Harrison of disk2disc has produced a superb remastering job which really does full justice to this marvellous recording. 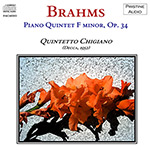