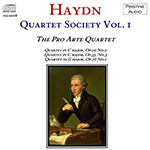 The Pro Arte Quartet ... appear simply to exist to enable the composer to make his will known to the world

The Pro Arte Quartet are to the Haydn quartets what Schnabel is to the Beethoven piano sonatas: they seem neither to interpret them nor to interpose themselves between the composer and the listener. They appear simply to exist to enable the composer to make his will known to the world. Unlike Schnabel, one is rarely aware of technical difficulties. The quartet is such a musical entity that one simply doesn't admire the first violin or the cello; one is too engaged in the musical discourse. Of course, the Pro Arte recorded fine Mozart and Beethoven and Schubert and Brahms, but their remarkably numerous (for the pre-World War II musical world) recording of 20-some-odd Haydn quartets and their almost genetic affinity for Haydn made them the preeminent specialists before the great Haydn awakening that began in 1950. To me, like Schnabel, they have not been surpassed.

Opus 20, No. 2. With a decent nod to Opus 9 and 17, Opus 20 is Haydn's first set of great quartets and supremely great each of the six is. Number two is a wolf in sheep's clothing in that each movement has irregularities. The first movement begins with a fairly regular exposition and development and then a recapitulation that really strays from the exposition follows. The slow movement starts like a passacaglia, sounds like an adagio from "Seven Last Words" and then ends lushly with a totally different theme. This is followed by a minuet that no one could dance to with a lovely trio and then a finale that is a very tight-lipped fugue all the way, but somehow manages to relax in the last 20 bars and end as if everything was just fine all along. Wow!

Opus 33, No.3. Subtitled "The Bird". The nickname comes from the trio of the minuet, but both the first and last movements have rather twittering themes. The first movement has a fairly normal exposition and development, but a highly irregular recapitulation. The slow movement is mostly decorative and not one of Haydn's best. The finale is presto, made from nothing, and amusing and satisfying.

Opus 77, No. 1. One of Haydn's supreme quartets. The first movement is a march to die for. A long movement with a repeated exposition and a searching development and just when you think you've heard every aspect of the march, the recapitulation springs some surprises. The slow movement is plangent and somber. The third movement is no minuet, but a real scherzo in everything but name. The last movement in the Pro Arte hands is incredibly carefree and flippant-even insolent! It is 1799 and I can imagine Haydn thinking, "I'm still full of cash from London; I'm more famous than my master (Duke Esterhazy); every second rate composer publishes his works under my name; I'm hot stuff".

I have heard and appreciated the Pro Arte performances before-on EMI LPs and on the Violin CD label. I have been happy to endure the "telephone booth" acoustics to get the artistry. In this release, the Pro Arte are now "out of the closet" and, yes, there is some background noise, but the dragon has been slain and the treasure beckons.