Enrico Mainardi (1897-1976) was born in Milan and began playing cello at just three years old. At the age of eight he made his public debut, playing a sonata by Beethoven, and subsequently toured Italy as a child prodigy. At just thirteen he played the Saint-Saëns concerto with Sir Henry Wood and his orchestra. The First World War forced him to give the instrument up for 4 years, and when he picked it up again he found he had forgotten how to play.

In disgust, he studied composition and piano in Rome and only resumed cello studies at the age of 24, going to Berlin to study under Hugo Becker. Between 1929-31 he played under Erich Kleiber at the Berlin state opera, and, in 1933, was appointed professor of cello at the Academia di Santa Cecilia in Rome. In 1941 he succeeded Becker at the Hochschule in Berlin. He was well known as a performer in Germany, Italy, Switzerland and Scandinavia, and as a teacher in France and England.

As a performer Maindardi went on to make a number of recordings, both as a soloist and in small chamber ensembles, most famously as a member of a Piano Trio alongside Edwin Fischer and Wolfgang Schneiderhann. (NB. Edwin Fischer's interpretation of Bach's Well-Tempered Clavier features elsewhere on this site.)

It is interesting to note that latterly there seems to have grown something of a cult following around Mainardi, most especially with regard to some of the more rare records he made with DGG in the 1950's, copies of which have been recently selling for several hundreds of dollars each on Internet auction sites.

This excellent recording was another winner of a star award in The Record Guide reviews of the 1950's, and is well worth a place in anyone's collection. Another superb restoration by Peter Harrison of disk2disc. 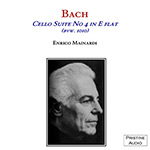