"It took guitar playing, songwriting, delivery, to a totally different height. And at the same time it confused us, because it wasn't band music, it was one guy ... Robert Johnson was like an orchestra all by himself. Some of his best stuff is almost Bach-like in construction"
- Keith Richards, Rolling Stones, "A Life" (2010)

Robert Johnson's influence on a generation of musicians cannot be overstated. The release, in 1961, of an LP called King of the Delta Blues was perfectly timed to capture the imagination of a new generation of young, often white and British musicians eager to explore this mysterious musical form, and talented enough to go on to become some of the most legendary popular music artists of the 20th and 21st centuries.

That LP was put together by Columbia producer Frank Driggs, and in the process of compiling tracks a number of test pressings were made from original metal masters onto super-quiet surfaces using originla 78rpm presses just before they were abandoned by record companies around the world. A set of these, in mint condition - just ten sides in all - found its way to Pristine, and forms the basis for this incredible mini-album of Robert Johnson's music, released to coincide with the 80th anniversary of his first recordings in November 1936.

But what you hear is not what you'd expect from an 80 year old recording - instead the combination of these astonishing test pressings and Pristine's XR remastering process brings you - for the first time - the sound of Robert Johnson in full high fidelity sound. In informal comments via e-mail, two legendary multi-platinum-selling musicians expressed separately and simply their first impressions: "WOW ! Brilliant !" - "Remarkable... really...."

"I kind of got hooked on it because it was so much more powerful than anything else I had heard or was listening to. Amongst all of his peers I felt he was the one that was talking from his soul without really compromising for anybody. In one way or another, he's been in my life since I was a kid."
- Eric Clapton, NPR (2004) 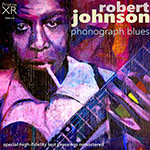