BLIND WILLIE MCTELL Searching The Desert For The Blues - PABL008

In astonishing newly XR-remastered sound quality - surely the best ever!

Like many pre-war Blues artists, Blind Willie McTell recorded for a number of record companies, often at the same time, under a variety of pseudonyms. Fortunately for the lover of vintage blues, none of these was the notorious Paramount record company, and as a result we have a body of work which not only stands up musically, but in terms of recording and pressing quality as well - unlike the recordings of the likes of Charley Patton, Blind Blake and Blind Lemon Jefferson, for example.

In some respects this ought to make the audio restorer's job easier, you might think. Alas, life is rarely that simple - with higher quality originals to begin with, one inevitably aims higher and is less able to settle for anything less than excellence.

In compiling this CD, I initially worked on some 40 tracks by Blind Willie McTell, in many cases from two or three different sources. Each was taken a considerable way along the road of restoration and remastering in order that a judgment could be made (a) between different copies of the same recording, and then (b) between the complete set to narrow it down to a full CD (and I apologise here both for having to leave some excellent material out, and for leaving some rather small gaps between tracks in order to squeeze as much on as possible).

Then comes the painstaking job of "finishing" - a near-forensic examination of each track, looking for individual clicks, surface swishes and other extraneous noises, and attempting to remove or reduce them, one by one, as well as varrying out further final noise and hiss reduction. For a set such as this, which had already taken several weeks to assemble, this finishing work took a further three full days of intensive effort to complete.

What do I hope to achieve with all this effort? The finest-sounding and most representative collection of pre-war recordings by McTell ever assembled. No doubt some will dispute the track selections - especially some are here on musical merit., others on sonic merit - but put together as a whole I do feel this considerably improves on all previous issues of this material that it's been my pleasure to listen to over the years. I hope you'll feel similarly! 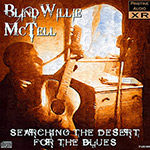