"You want to know how good the blues can get? Well this is it."
Keith Richards on Robert Johnson

After the success of our experimental release of Robert Johnson 'Legendary Blues' the requests for the rest of his recordings came in thick and fast. I also took note of the comments - and criticisms - of that issue whilst preparing this release.

In preparing a "new" Robert Johnson release, one should be clear that there is little point in duplicating that which has already been issued. Each has its flaws - some of them glaring, others more subtle - and each has its adherents. My aim with Volume Two has been to both keep with those who've written to say that the first volume was by far the best remastering Johnson they'd ever heard, whilst hopefully addressing some of the concerns of others and bringing them 'on board' as well.

One example of this, heard on Volume One (PABL001), was a reasonably subtle use of reverberation, which was present in the source material used for that release (though not on the originals), and not added by me. Volume Two has been sourced from a variety of origins and no reverb has been added. My aim has been both to bring you a cleaner sound wherever possible, and - using XR remastering - one that is more authentic to the overall tonal quality of Johnson's voice and guitar, despite the limitations of the recording equipment of the day.

I have also, in preparing this release, been able to make minor speed corrections to some of the tracks, basing my conclusions on analysis of electrical mains hum harmonics found buried in many of the tracks, and repitching to between 0.2 and 2.5% (where a semitone is approximately 6%).

This release brings together all of the remaining known releases of Robert Johnson's recordings. It has been programmed in order of recording, omitting those already issued on Volume One. Where this issue contains two takes of a particular song, I have relocated the second take to later on the recording. This is a personal preference and a departure from releases which group takes together. 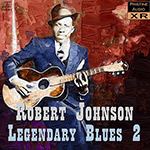 No doubt in my mind these blow everything else out of the water, unless you're a surface-noise purist to the point of masochism. You can hear so much more in Johnson's voice. Conversely, I'm less impressed by his guitar playing than before, now I can hear the stumbles he makes. But what a great expressive voice he has.