Although Jascha Horenstein's reputation today rests mainly on his Mahler and Bruckner recordings, it was his performances of Beethoven in Weimar era Berlin that first attracted the attention of important critics like Adolph Weissman, who “experienced anew Beethoven’s Eroica”, and Walter Schrenk, reviewing the same concert, who described Horenstein as “surely one the greatest kapellmeisters of the young generation.” This was particularly true for his performances of the Eroica and the Ninth symphonies, the two works by Beethoven that he conducted more often than any of the others. The Fifth and the Seventh were also two of his favorites, while the other five symphonies rarely appeared in his programs.

His view of Beethoven was controversial, never routine and often unpredictable. On the few occasions he conducted the Eighth it was placed as either the opening or the closing item in the first half of a concert, as here, but rarely as the main item of the evening. His brisk, no-nonsense account, given a ferocious kick to the con brio rhythm at the very opening, sets a driving, muscular pulse from the very first bar that never relaxes the forward thrust, also in the crisp and graceful account of the "metronome" movement that follows. A genial, sunny reading of the minuet precedes a vigorous execution of the ebullient last movement, the whole invested with a propulsive momentum that reveals a work of major proportions, a far cry from the “little symphony” sandwiched between its two “serious” and more famous siblings.

Beethoven's Eroica Symphony was the only work Horenstein recorded twice for Vox Records, first in Vienna in February 1953 during the same period as his recordings of Mahler's First and Bruckner's Ninth, and then in Baden-Baden in May 1957 (PASC 505). Speculation suggests that his reasons for recording the work twice in a short space of time, and for the same label, was because during the four year interim period, stimulated by his research on historical performance practice, he underwent a radical transformation in his conception, not only of the Eroica but of how all music should be performed. It was the period in which he gradually abandoned the subjective, post-Romantic ethos and style in which he grew up, in favor of a more objective, cooler, anti-Romantic approach recalling the Neue Sachlichkeit tradition of the Twenties. Horenstein himself reportedly told an interviewer that “the first Eroica I conducted with my heart, the second with my head.” This disc reproduces that “heartfelt” first version of 1953 with the Vienna Symphony Orchestra, a large-scale, deliberately paced, powerful reading in which the protagonist, a brooding and angry introvert, presents a disturbingly harrowing vision that leaves the listener grappling with questions about the fragile and uncertain world inhabited by Beethoven's hero. 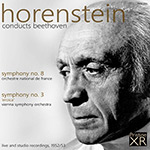