However, using standard flat replay systems to produce those LPs and CDs has only told perhaps half of the story - the recordings gently rolled off both higher and lower frequencies. However, these essential details are often still intact, buried in the recordings as if awaiting a remastering method capable of extracting them and restoring their original levels.

These transfers
Although the Fourth Symphony appears to get off to a slightly rough start, thanks to damage to the original acetates, and misses the characteristic clicks of Mengelberg's baton, things soon settle down and once again in this series, excellent sound quality can be heard in both recordings. Opening up the top end frequencies of these recordings has revealed flaws previously buried in the original - distortion and swishing both had to be tamed or eliminated, with many thousands of individual manual restoration interventions required for each symphony. Inevitably the odd shortcoming will remain audible, but ultimately the sonic impact of these restorations has been hugely satisfying and enjoyable. 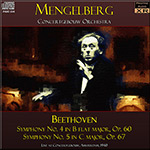 You’re in for a uniquely exciting and rewarding Beethovenian experience

Pristine’s Andrew Rose continues his traversal of Mengelberg’s live 1940 Beethoven cycle, with (once again) amazing results. Applying his XR remastering system to mint Philips LPs, Rose’s transfers (after some poor sound at the beginning of the Fourth Symphony, owing to damage to the original acetate source) far surpass the quality of any previous CD release, including Philips’s own.

The first movement of No. 4 (with exposition repeat) is rich and weighty, with Mengelberg’s characteristic highly polished sheen to the orchestral tone, together with minutely detailed characterization to the end of clarifying phrase structure—listen, for example, to the way the main theme is subjected to constant tempo manipulation and rhetorical emphases, or his leisurely swinging into the second theme. Yet along with such license, there is a remarkable feeling of authentically classical elegance deriving from his phenomenal rhythmic control. The Adagio is notable for its operatic vividness of “vocal” phrasing (the main theme memorably molded, with more agogic manipulations than you would think the music can take, but Mengelberg makes it work). The Scherzo achieves a remarkable balance between whiplash snap with graceful shapeliness. The finale (with exposition repeat) is again unhurried, with time for nuanced shaping, and tremendous bite and articulacy.

The first movement of the Fifth is deliberate, though very flexible, and notable for his highly calculated intensification of rhetorical underlining as the movement progresses—most obviously in the increasingly dramatized treatment of the motto at each appearance, but also in more subtly structural ways, as in the degree of controlled accelerando he applies toward the closing section of exposition and recapitulation. The exposition repeat is not observed (surprisingly, given both his generosity with repeats elsewhere in this cycle, and his observance of it in the Telefunken studio recording of a few years before). His obsessive clarity of phrase articulation reaches rare heights of ferocity in the coda. At 10:07, the Andante is a whole minute slower than the brisk 1937 studio version, and a miracle of grace, fluidity, and pungent clarity—for a small example, hear the woodwind arabesques at bars 132 ff., combining minutely nuanced shaping with an extraordinary singing freedom. The Scherzo is phrased in long arcs, continued in an exceptionally fluid account of the Trio. The finale combines massive rhetorical freedom, at a constantly ebbing and flowing tempo, with articulation of phenomenal precision. The orchestra members play as if their lives depended on it; I don’t think it’s reading too much into these performances to hear in them the same kind of anxiety-tinged edge to the musical intensity that distinguished Furtwängler’s wartime concerts. At the same time, the German maestro’s (1943) conception of Beethoven’s symphonic drama remained something altogether loftier, more idealized, less personal and idiosyncratic than the Dutchman’s, reflected in his more seamless, gradual approach to tempo adjustment. At the other extreme, Toscanini’s straight-ahead, uncompromising 1939 treatment—for all its incandescence—comes across as comparatively lacking in complexity and nuance.

If you don’t know these performances, you’re in for a uniquely exciting and rewarding Beethovenian experience. If you do, you’ll hear them with new ears in these revelatory transfers.