Hermann Scherchen at his best in Beethoven

"The gramophone's most unpredictable conductor gives a superlative performance of the Beethoven Fourth. It is powerful and tense in a degree not normally associated with the work, but made entirely convincing by the dash and skill of its presentation. The traditional view of the Fourth as a predominantly lyrical symphony has indeed much to recommend it; but the performance here of its first, third and fourth movements welds the lyrical elements briskly, and not at all unacceptably, into a vigorous whole. The slow movement, too, has its felicities: the slightest of accelerandos, just before the end, lends a new point to that familiar demisemiquaver passage. And this movement, along with the others, exhibits to the full the most beautiful orchestral playing: there are woodwind passages here to catch the heart (and, thinking of Scherchen's whirlwind tempo for the bassoon in the finale, the breath!)

As the recording is very good, having all the brilliance but not quite all the richness of the best, this must inevitably become the primary recommendation for a one-sided version of the Fourth; it outclasses Toscanini's H.M.V. on one or two counts. Less tension, if that is sought, may be found in Karajan's reading on the very well-recorded Columbia; here the symphony's finale goes over on to the second side, which is completed by the extended aria Ah, Perfido! An even less tense performance is secured by Krips on his Decca disc; but, though recorded most beautifully smoothly, that record, given wholly to the symphony, is now beginning to look expensive..." - from the Gramophone review of 4th Symphony, April 1956

Some recordings from the 1950s are a pleasure for the transfer and remastering engineer, and these certainly come into that category. Well-recorded for their day, on excellent near-mint pressings, and perfect for XR remastering to bring out the very best sound quality - and, most importantly, some really excellent performances.

Scherchen's recording of Beethoven's Fourth Symphony was originally coupled with a recording of the Fifth, made at the same time and with the same orchestra - the Royal Philharmonic recording under a pseudonym, "The Philharmonic Symphony Orchestra of London". My original plan to reunite these recordings for a single release was thwarted by the length of the Overtures LP when coupled with his 1951 recording of the Emperor Concerto with Badura-Skoda, which together run to a little over 82 minutes. Hence the decision to pair here the Overtures with the Fourth, saving the two mighty "Fifths" for another issue due out shortly after this release.

Transfers and XR remastering by Andrew Rose at Pristine Audio, December 2009
Original source recordings from the private collection of John Phillips
Cover artwork based on a photograph of Hermann Scherchen 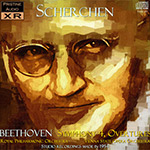 Scherchen’s Fourth was truly revolutionary for its time

This is the second installment in Pristine’s edition of Hermann Scherchen’s Westminster Beethoven cycle. Again, the transfer of the Fourth Symphony, from a U.K. Nixa LP, is evenly matched with the recent Tahra edition, with little to choose between the two—both are excellent, Tahra a little brighter, Pristine a little warmer. The overtures have no competition, however, making the new disc indispensible on their account.

Like his reading of the Eighth with the same orchestra (Beecham’s Royal Philharmonic, recording for contractual reasons under the pseudonym “Philharmonic Symphony Orchestra of London”), Scherchen’s Fourth was truly revolutionary for its time (1954) in taking Beethoven’s metronome markings seriously. The slow introduction is tense and ominous, with hair-trigger dynamic nuances, leading to an Allegro of exceptional brio and sharpness of focus, at exactly Beethoven’s marking of 80; by comparison, contemporaneous versions range from Karajan/Philharmonia (EMI, 1953) at 66, to that incorrigible laggard Toscanini (NBC/RCA, 1951) at 72. Scherchen was decades ahead of his time here; apart from his own live 1965 performance with the sub-par Swiss-Italian Radio Orchestra (Accord), and René Leibowitz’s blistering 1961 recording, also with the RPO (Reader’s Digest/Scribendum), the tempo was unmatched until the period-instrument versions of the 1980s. What really matters, of course, is not the tempo in itself, but what Scherchen is able to do with it: the exceptional buoyancy, razor-sharp rhythmic articulation, and textural transparency (the pp strings and timpani rolls before the recapitulation speaking with a rare point and clarity). The RPO is in formidable form throughout: those legendary wind principals really shine in the slow movement, and in the moto perpetuo finale the orchestra’s response, both solo and collective, to Scherchen’s whirlwind pace is truly breathtaking.

The stellar RPO is a hard act to follow, and plunging straight into the Viennese sound world of the overtures is initially quite a shock to the system—wiry strings, acid-toned winds, and some dubious tuning. But no matter! They roar their way through these overtures with a zest, larger-than-life vitality, and total commitment that serve the spirit of Beethoven as few other such collections have. All are immensely enjoyable, but highlights are Consecration of the House, which finds the orchestra hanging on for dear life at a tempo bordering on reckless—but what a ride!—and King Stephen, dispatched with an unforgettable Schwung and Hungarian panache. I eagerly look forward to Pristine’s release of the remaining overtures.