Brahms wrote his Double Concerto for Violin, Cello and Orchestra in 1887 - it was to be his final orchestral work, and it came into being largely as a 'peace offering' to the violinist Joachim. The two former friends had not spoken for several years, but after the first performance in Cologne in October, 1887, with the composer conducting, Joachim and the cellist Robert Hausmann soloing, Brahms told an acquaintance: "Now I know what it is that's been missing in my life for the past few years... It was the sound of Joachim's violin."

However the initial response to the concerto was lukewarm, and Brahms quietly smothered drafts he'd made for a second double concerto, having his own doubts about the piece and his abilities. Eventually Joachim did come round to admiring the piece, but it was never fully embraced by the public during Brahm's lifetime, and the requirements for two soloists have hampered regular performances ever since. Commenting some 68 years later in The Record Guide, Sackville-West and Shawe-Taylor wrote:

Brahms's last orchestral work does not immediately communicate its magic to the listener who has learned to love the younger lyrical Brahms. At first it may sound grey and unbending. On closer acquaintance there is revealed a rich vein of humanity and a lovely incandescent glow...

This recording, featuring the talents of Fournier and Janigro, well represented here in their Piano Trio with Paul Badura-Skoda, with a Viennese orchestra some of whom may have been old enough to remember Brahms walking the city, is presented in fine sound from the magical studio of disk2disc, where Peter Harrison has once more worked his sonic alchemy.

BRAHMS Double Concerto in A minor for violin, cello and orchestra, Op. 102 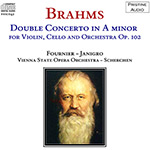