Transfer from a near-mint copy of the LP was relatively straightforward, though some unusual surface noises created problems during restoration. The original recording also suffered from quite high hiss and background noise levels, which I've managed to reduce quite considerably without damaging the tone of the recording itself. There were also a number of hum tones, from both 50Hz and 60Hz mains electrical sources, indicating that the original European recording had probably been mastered or dubbed in the USA prior to pressing.

Original sound quality was generally good, though a dip in the frequency response centred around 100Hz had left the bass a little thin, and at the top end the treble rolled off more than one might expect. Both of these have been rectified, bringing a slightly fuller and more natural sound to the recording than heard on the record itself.

Restoration and XR remastering by Andrew Rose at Pristine Audio, July 2008
Cover artwork based on a photograph of Noel Mewton-Wood 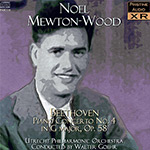