STRAVINSKY The Rite of Spring

Jascha Horenstein's only recording of The Rite of Spring was made in stereo, alongside his Firebird Suite and other recordings made in and around April 1957 for Vox. Yet when Vox issued the original LP - and again when they reissued Horenstein's recording of The Rite fourteen years ago - they did so in mono. To most reviewers this seemed no great surprise, even though the Firebird was offered in stereo. The assumed explanation was this: recording industry was at a point of transition, and what passed muster one week in mono might be rejected the following week, as the new vogue for stereo quickly spread.

Incredibly, fake stereo LPs of the Rite were later issued, yet this is no fake stereo recording. Something very unusual happened to Vox's stereo master tape of Horenstein's Rite, and I suppose it's unlikely we'll ever discover quite what. It appeared on a 1970s stereo LP on the rather suspect Classica Records label in the US (CLAS 108), under a false name: the Rome Symphony Orchestra, conducted by one Leonardo Scotti - one of a number of older Vox or Everest recordings the label issued in disguise. Only recently has the recording been correctly identified as the 1957 Vox by Jascha Horenstein - as his cousin, Misha Horenstein (and others) verified to me.

I managed to source two copies of the Classica Rite LP to work from, together with a near-mint English pressing of the Symphony of Psalms, originally issued by Pathé but released in the US on Angel. The latter, despite being winner of the Grand Prix du Disque in 1954, was not well-recorded. However the LP was well-pressed, and XR remastering has made a superb job of rendering it not only listenable, perhaps for the first time, but also very enjoyable.

The stereo Rite LP, meanwhile had had its sides reversed and suffered a thin tone with a distinct lack of bass. Both faults, and others, have been rectified for this release. 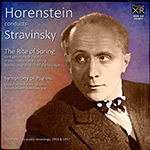 Jascha Horenstein’s 1957 Le sacre has long been assumed to be a monaural recording, as Vox issued it (on LP and on CD), and was once offered in fake-stereo on LP. But this is the real thing: The original stereo recording disappeared, but not before it was pirated on a pseudonymous stereo Classica Records LP, two copies of which served as Andrew Rose’s sources. This historical situation—the legal copyright holder failing to maintain its protected materials, and only a pirate (e.g., illegal by copyright law) saving the situation—is not uncommon. I will be presenting an even more egregious case in the near future. It shows today’s horrendous copyright laws to be a farce, abused in practice as much by legal holders as by illegal usurpers.

It is immediately apparent that the stereo is genuine; as was the case with many early stereo recordings, the spread is unnaturally wide, with woodwind instruments coming at the listener from all angles. The sound is very reverberant. Never having heard the Classica LP, I can’t say how much of that comes from the source. The recording’s low end is generous but soft. The tight rhythmic climaxes are just not potent enough: the bass drum whacks starting at measure seven of “Spring Rounds,” 49 in the Dover score, barely register. And 53 to 54 gets pretty messy, as the recording is unable to cope with the fff tutti. A limited palette of color is more the orchestra than the recording.

Horenstein’s Le sacre is very slow (total time 35:11), but it is a potent interpretation. I have railed against the machine-like perfection and ease of several 21st-century performances, but a certain level of instrumental security is required. Tough struggles can add to the effect of a Sacre (e.g., Stravinsky’s 1940 New York Philharmonic) but at some points Horenstein’s troops seem to be taking it easy, not taking enough chances. Again and again, rhythmic details are just a touch off. At other times, they are firing on all cylinders, with exciting results.

There is no question that Horenstein was an important conductor. That wasn’t widely enough recognized during his life (and, being a Jew, his career was broken by the Thousand-Year Reich), so a majority of his recordings were made with second-line orchestras such as the Vienna Pro Musica (a pseudonym for what?) or Vienna Symphony rather than the Vienna Philharmonic. Given the London Symphony, his 1959 Mahler Eighth is legendary. Sometimes he achieved magnificent performances even with lesser ensembles. I’m afraid that isn’t the case here; a lot of the elements are in place, but the orchestra is not up to the task.

The Symphony of Psalms is a monaural recording from a few years earlier. The orchestra is acceptable some of the time, but Horenstein is let down by a weak, shaky chorus and a dreadful recording, cold and distorted. Andrew Rose, in his notes, claims that “XR remastering has made a superb job of rendering it not only listenable, perhaps for the first time, but also very enjoyable,” I can’t go that far.

Nevertheless, these two recordings have never sounded even this well before. Horenstein fans will not need my endorsement.