Leopold Stokowski was a staunch champion of contemporary music and Schoenberg was one of the many 20th century composers whose works found in Stokowski a firm advocate. Indeed, Stokowski was the only conductor to perform all of Schoenberg's orchestral music during the composer's own lifetime. His performances included the World Premieres of the Violin Concerto in 1940 (with Louis Krasner as soloist and the Philadelphia Orchestra) and the Piano Concerto in 1944 (with Eduard Steuermann, piano, and the NBC Symphony, of which Stokowski was then co-conductor with Toscanini).

Stokowski gave the American Premieres in Philadelphia of Schoenberg's First Kammersymphonie (1915), the Variations for Orchestra (1929) and Die Gluckliche Hand (1930). The US Premiere of Gurrelieder in 1932, together with its immediate subsequent performances, were recorded by RCA and the resulting 78rpm album remained the only recording of the work in the catalogue until the advent of LP. When Schoenberg died in 1951, Stokowski marked the event the following year by recording Verklärte Nacht in the performance heard here. His championship of the composer was marked by further performances of Gurrelieder in 1961, firstly in Philadelphia and again a few months later in Scotland, when he opened that year's Edinburgh International Festival with the work.

Bartók featured less on Stokowski's concert programmes and in his discography, though he did record the Music for Strings, Percussion and Celesta in 1957 for Capitol so as to exploit their new "Full Dimensional Stereo Sound." Three years later he recorded Bartók's Concerto for Orchestra with the Houston Symphony for Everest. The performance heard here of the Sonata for Two Pianos and Percussion was one of many works he recorded for RCA in the 1950s that he never played in public.

Morton Gould was one of the great many young American composers whose music Stokowski presented to the public for the first time. In 1936, he conducted the World Premiere of Gould's Chorale and Fugue in Jazz and in 1941 he recorded the Guaracha from the Latin-American Symphonette No. 4 with his new All-American Youth Orchestra. Two years later he played Gould's Two Marches for Orchestra with the NBC Symphony, the broadcast of which was released on Cala Records by the Leopold Stokowski Society in 1999 (CACD0526). The recording of Gould's Dance Variations heard here was one of the many 'World Premiere Recordings' made by Stokowski during his long and illustrious career.

Additional points regarding these recordings:

1. None of these recordings has previously been reissued on CD. (The New York recording of the Schoenberg is not to be confused with Stokowski’s stereo remake, taped five years later with a Hollywood pickup orchestra.)

2. The Bartok and Gould are Stokowski’s only recordings of the works.

3. The Schoenberg, although written in 1899, was premièred in 1903 in its string sextet form and arranged for string orchestra in 1917, which is why it is included here in a 20th Century collection.

4. The Gould work is one of only two recordings Stokowski made with the San Francisco Symphony Orchestra. 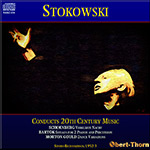 This CD should be welcomed by Stokowski collectors

Leopold Stokowski was known for the silky-smooth sound he could produce from any orchestra; his emphasis on sound quality led his critics to complain that he often neglected the structural or dramatic elements of music. This release brings those thoughts to mind, as none of these pieces would seem to mesh well with the Stokowski style. His Verklärte Nacht is sinuous, almost greasy, a performance that might have won converts to Schoenberg in 1952 but is at odds with today’s view of it as a dramatic blockbuster with an edgy story to tell. The cold, crisp night, the walk along the river, the woman’s revelation that she is pregnant by another man, and her lover’s eventual acceptance are all missing; could a mid 20th-century audience even have considered such a tale? Certainly not in America! So Stokowski’s performance as a lush tone poem at least fits his era.

The scoring of Bartók’s unusual sonata is as far from smooth and silky as one can get, leaving no possibility of Stokowskian tricks such as free bowing and odd seating arrangements. Nevertheless, he knew how to deal with every type of music. That this recording is well played can be credited to the four performers, and yet there is a Stokowski feel to it, seemingly more consonant and less angular than most performances. The ringing percussion gets more attention than the banging instruments—which is fine; as is the case with most Bartók music, this sonata works in any interpretation.

Morton Gould’s Dance Variations comes across as weak tea in this company. It is bright ballet music, filled with two-piano excursions and bouncing percussion. As pure music, it leaves me cold; when I envision dancers flitting across a stage, it becomes almost charming. Mark Obert-Thorn and Pristine’s Andrew Rose have made the most of these monaural recordings, so this CD and/or its Internet streams (pristineclassical.com) should be welcomed by Stokowski collectors.