Leos Janacek (1854-1928) is perhaps best known for the music he wrote in the very last decade of his life, most particularly the operas Kátia Kabanová, The Cunning Little Vixen, The Makropulos Affair and From the House of the Dead.

Rather less well known, but from this same period of great creativity, are the two String Quartets of 1923 and 1928. Although tonal in nature, both quartets use a much wider tonality and modality than Janacek had used in his early works; he had by this stage long abandoned the concept of a fixed key signature, and brings in melodic patterns based on popular Moravian intonations.

The First Quartet can be seen as a reaction to Tolstoy's "The Kreutzer Sonata" in which the protagonist tells fellow train travellers the story of his married life, ending with the murder of his wife, who is falsely suspected of being unfaithful. Janacek's music is also perhaps a reaction against the author's attempt at solving the problem of music's affectation of man's emotional life and his actions. In a letter written in 1924, Janacek stated "I had in mind the wretched woman, tormented, beated and murdered", and in the music we hear his sympathy with the woman and the passions explored in the book, and yet Janacek's interpretation ends not in a murderer's knife, but instead a glorification of love.

The Second Quartet has originally been titled "Love Letters"; this was later moderated to "Intimate Pages", though the inspiration for the 74-year-old composer was clear in the figure of the much younger, and married, Mrs. Kamila Stosslova. The previous year he had declared to her: "for the last eleven years, and without even suspecting it, you have been my protectrice from every conceivable point of view... Wherever there is warmth of pure sentiment, sincerity, truth and ardent love in my compositions, you are the source of it!" The Quartet can be seen as an outpouring of bliss and passionate ardour, again drawing on Moravian folk musicality, in free form, an almost breathless expression of love.

"I don't think I shall ever again be able to write anything deeper or more truthful" wrote Janacek to his beloved; three months after the work's première he was dead.

This wonderful recording of Janacek's quartets was the first of several made by the Smetana Quartet. It has long been at the top of the list of afficionados for revival, and thanks to the masterful touch of Peter Harrison, we're delighted to restore it to the current catalogue. 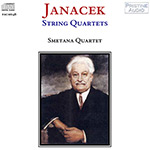 "This, the first of the Smetana Quartet’s several recordings of Leos Janáček’s two chamber masterpieces, has always been among the most highly sought by collectors for its searing intensity and complete identification with the material...Pristine Classical’s remastering is remarkably good...if you can adjust your ears to the rather boxy mono sound, this disc is a must." - Fanfare, May/June 2008